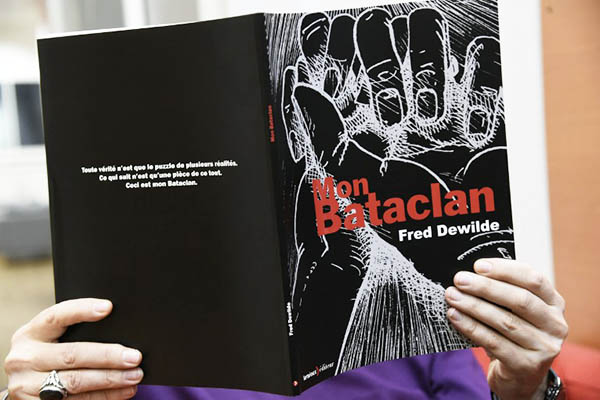 Artist Fred Dewilde, who was among survivors of carnage at Paris venue, has recounted terror in black and white.

Fred and Elisa are lying on the floor of Bataclan concert hall. Alive but covered in blood, the two strangers’ hands touch in the darkness. This is just one scene from a new graphic novel, Mon Bataclan [My Bataclan], drawn by Fred Dewilde.

The artist was among the survivors of the carnage at the popular Paris venue on Nov. 13 last year when Islamic State jihadists massacred 90 people at a rock concert. They were among a total of 130 people killed by I.S. gunmen and suicide bombers across Paris that night in France’s worst-ever terror attacks.

Dewilde, 50, recounts the terror in black and white, depicting the jihadists as skeletons with deathly white faces. The book, which also includes 22 pages of eyewitness accounts, is due out in France, Belgium and Switzerland on Friday.

In the Bataclan, a Friday night crowd had been enjoying a gig by Californian band Eagles of Death Metal when the shooting began. “We are no more than a teeming mass of the living, the injured, the dead, a mass of fear, screaming in terror,” Dewilde writes of that moment. He finds himself lying on the floor near a corpse. “I take stock of what we are experiencing. I am still alive,” he writes. “A living being among the dead.”

Beside him is Elisa, a young woman who has been injured. “She could have been my daughter,” Dewilde writes. In low voices the strangers try to comfort each other. They know that if they cry out, revealing that survivors are still lying among the bodies, the jihadists will shoot them. “We detach ourselves from this horror and create a bubble of humanity,” Dewilde writes.

Their ordeal lasts for two hours before the police arrive. Dewilde is physically unharmed, but he is left with “the smell, the taste of the atrocity, the incomprehensibility.”

The second part of the book is titled Living Again, but this is not a straightforward process for the graphic artist after what he has experienced. “Is it really worth washing today? Or eating? I’m not hungry,” he writes in one scene. He jumps at sudden noises. He recalls being incapable of concentrating on anything for more than a few minutes. But he pays tribute to his family’s efforts to help him come to terms with the trauma—“my wife carried me,” he says—and the healing power of humor.

Even in the Bataclan, Dewilde remembers, he somehow managed to whisper jokes to Elisa.

Writing the book was also cathartic, he notes. “By chance, I finished the drawings on Friday, May 13. Six months later, to the day.”

He insists he feels no hatred over what happened and has stressed that ordinary Muslims must not be blamed for the series of jihadist attacks that have rocked France since January 2015. People must not “descend into fear of the crowd, of non-whites, of the other,” Dewilde wrote in an afterword following July’s truck attack, when a jihadist mowed down 86 people in a crowd celebrating Bastille Day on the seafront in southern Nice. “The enemy has no color and no religion. The enemy is fanaticism, it’s fear, it’s the madness that leads to war.”

The Bataclan is planning a defiant return to concerts next month, when France will mark a year since the Paris attacks.