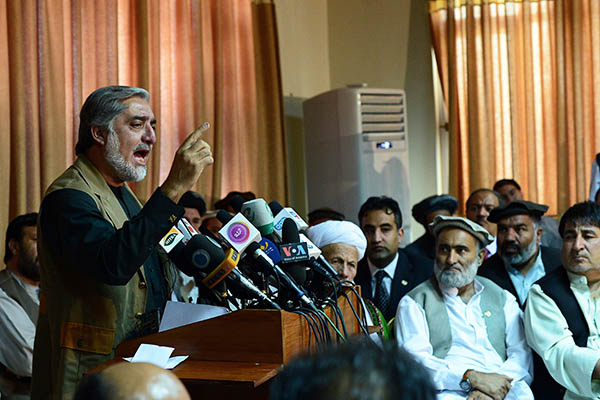 Presidential candidate Abdullah, who had boycotted vote count over rigging allegations, agrees to participate in negotiations.

A top Afghan election official accused of fraud resigned on Monday, raising hopes of ending a political deadlock that threatens to derail the country’s presidential succession as NATO troops withdraw.

Zia-ul-Haq Amarkhail, head of the secretariat of the Independent Election Commission (IEC), denied all charges against him but said he was stepping down to save the election process. Presidential candidate Abdullah Abdullah has boycotted the counting of votes from the run-off election a week ago, accusing the IEC of being biased against him in the contest against his rival Ashraf Ghani.

“Now the door is open for us to talk to the [election] commission and talk about the conditions and circumstances that will help the process,” Abdullah told reporters after Amarkhail resigned.

Abdullah had called for Amarkhail’s removal since the June 14 vote, which was at first hailed by the U.S. and other international allies as a successful part of the country’s first democratic transfer of power. A smooth election is seen as a benchmark of success for the U.S.-led coalition that has fought against the Taliban and donated billions of dollars in aid to Afghanistan since 2001.

“I have resigned only to protect the election process, and so that Dr. Abdullah Abdullah can put an end to his boycott and resume his relationship with the IEC,” Amarkhail said at a press conference. “The audio recordings regarding fraud were fake,” he added.

Reports of the ongoing vote count suggest that Ghani has made a surprise comeback after finishing behind Abdullah in the first-round election on April 5. The preliminary result is due on July 2 and the final result, after adjudication of complaints, is scheduled for July 22.

International diplomats expressed alarm over the prospect of a disputed outcome and the risk of civil unrest as military assistance and civilian aid declines. The threat of ethnic friction erupting is a constant concern for Afghanistan, where tribal loyalties are still fierce after the 1992-1996 civil war.

Abdullah’s support is based among the Tajik minority and other northern tribes, while Ghani is a Pashtun—Afghanistan’s largest ethnic group, which is strongest in the Taliban heartlands of the south and east.

Ghani’s campaign said it also welcomed Amarkhail’s resignation for “the sake of stability,” and denied he was working to commit fraud on Ghani’s behalf.

Outgoing President Hamid Karzai has vowed to deliver a successful election as his “legacy,” though it is unclear if he has played a role in behind-the-scenes efforts to end the deadlock, and he has not named his preferred successor.

Abdullah’s allegations that in several provinces there were more votes than eligible voters have yet to be resolved, and neither candidate looks likely to concede defeat. If the handover of power is delayed, it could discredit claims that a functioning state has been set up in place of the Taliban regime, which was ousted in 2001 for sheltering Osama bin Laden.

After Amarkhail’s resignation, the U.N. on Monday said it “called on the presidential candidates to fully re-enter the electoral process, cooperate with the electoral institutions and respect their decisions.”

Abdullah, a former resistance fighter, believes fraud denied him victory in the 2009 election when he lost to Karzai. He often said that only a repeat of ballot rigging could keep him from power this time. He faced Ghani in the run-off vote after the two came first and second in an eight-man first-round election, when Abdullah won 45 percent against Ghani’s 31.6 percent.

NATO’s combat mission in Afghanistan ends this year, though 10,000 U.S. troops will remain into 2015.