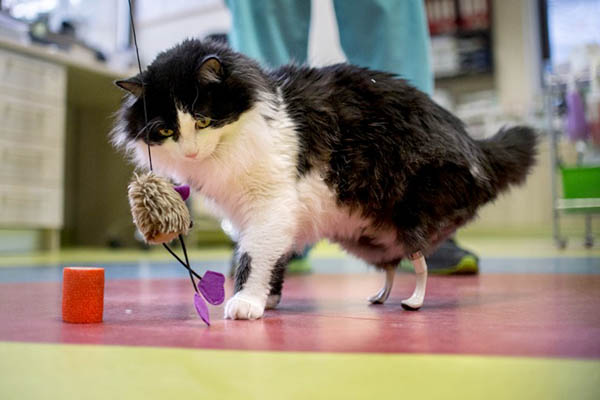 Bulgarian stray cats given bionic legs in first such European operation outside Britain.

Two stray Bulgarian cats who lost their hind legs in accidents have been given bionic paws, in what vets say is the first such operation in Europe outside groundbreaking Britain.

One-year-old Pooh, whose name means “fluff” in Bulgarian, scurries around Sofia’s Central Vet Clinic, chasing a toy mouse and curiously sniffing at medicine bottles inside an open cupboard—just like any other cat would. The only difference is a gentle tapping sound as his two tiny polymer-and-rubber paws mounted on titanium stems touch the floor.

Pooh, who is thought to have lost his legs in a car or train accident last April, is back on the prowl thanks to Bulgarian veterinary surgeon Vladislav Zlatinov. He is the first vet in Europe to successfully apply the pioneering method of Irish neuro-orthopaedic surgeon Noel Fitzpatrick, who shot to fame in 2009 when making Oscar the first bionic cat by fitting him with new hind legs in Britain.

A month after the black-and-white feline took his first steps after a final graft in December, Zlatinov said this week the procedure could now be considered a success.

“Pooh’s condition is more than satisfactory. There might be some clumsiness but he can walk, jump and run,” the 35-year-old told AFP. If all goes well, Pooh’s skin will eventually grow over the bone and stem tightly enough to prevent infections, Zlatinov said.

“Cats who lost one leg do pretty well. But what happens if they lose both their hind legs? Yes, they move somehow, but what quality of life are we talking about?” he said.

Zlatinov recently performed a graft on another cat, eight-month-old Steven who also lost both hind legs last year. “[The operations] give hope that even in a country like Bulgaria innovative things can be done,” Zlatinov said.

Pooh and Steven were brought to the clinic by animal charity Let’s Adopt Bulgaria, which paid for the operations. “We went to Zlatinov looking for a solution because he had solved other hopeless cases of injured animals before,” Vyara Mladenova of Let’s Adopt said on Friday. “But we didn’t expect him to offer this solution and for it to be successful.”