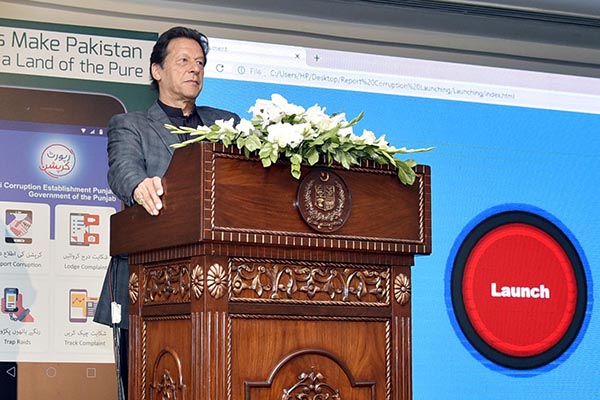 Launching a mobile app in connection to International Anti-Corruption Day on Monday, Prime Minister Imran Khan hoped it would help transform Pakistan into a modern and transparent nation.

During his speech, the prime minister hailed the anti-corruption authorities in Punjab province, saying they had successfully recovered billions of rupees from corrupt elements. These recovered funds, he said, would be spent on the uplift and betterment of people.

Khan said it was unfortunate that the masses were unaware about the link between corruption and societal ills and urged the Punjab government to widely disseminate information about the money it had recovered.

The prime minister referred to China, saying Pakistan’s neighboring nation had detained hundreds of people on graft charges to eradicate corruption from within its ranks. He said corrupt nations always suffered while transparent nations prospered. He said several African nations boasted plentiful natural resources, but their people face extreme levels of poverty due to rampant corruption in their societies. On the contrary, he claimed, Switzerland lacks natural resources, but is very prosperous and rich.

Khan said modern and prosperous societies place great emphasis on anti-corruption efforts, as corruption diverts public money that should be spent on welfare projects to the “pockets of corrupt people.” Overseas Pakistanis would also be more inclined to invest in their homeland if they saw there were no corruption, he added.

Buzdar said the government was committed to eradicating the menace of corruption from Punjab province. He said the newly launched app would allow people to view the government’s progress on their complaint.

Outlining the accomplishments of his government, he said the Anti-Corruption Department of Punjab had recovered land worth Rs. 132 billion. Another Rs. 4.75 billion have been deposited with the national exchequer, he added.

Akbar, meanwhile, said the aim was to completely digitize the Anti-Corruption Department and this app would help automate the entire process.

Punjab Anti-Corruption Director General Muhammad Goher Nafees said in the past 16 months, his organization had received 31,746 complaints and held 6,883 inquiries. He urged people to fully utilize the facility by lodging complaints against any corrupt elements and officials.

The app is available on the Google Play Store here: https://play.google.com/store/apps/details?id=com.pkgov.anticorruption

please write link for the app

I can’t seems to Find the APP

Can anyone type link ?

I want link of this App

Not been able to find the app!

The first question one needs to ask is what they mean by ‘corruption’ here. Corruption can be in many forms including but not limited to financial corruption, legal corruption, moral corruption, use of authority for unfair means, misuse of power etc.