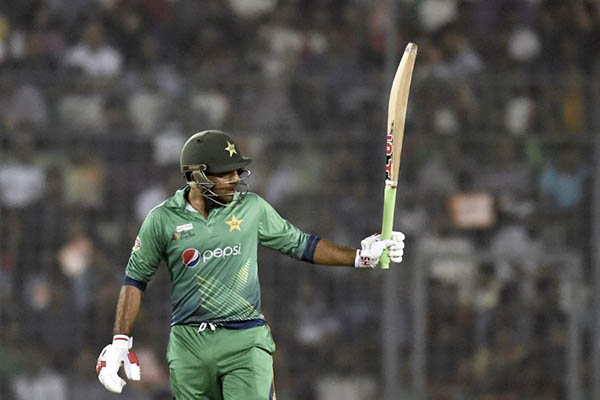 New captain Sarfraz Ahmed will face his stiffest test yet when he leads unfancied Pakistan in the Champion’s Trophy—starting with a highly-charged clash against India.

After qualifying by the skin of their teeth, Pakistan will need to overcome serious batting deficiencies to be competitive following their struggles in the one-day format in recent years.

Pakistan’s tournament in England starts with the toughest of games against arch-rivals India, the defending champions, in Birmingham on June 4. They are looking to halt a slump that began with a first-round exit from the 2015 World Cup, prompting all-rounder Shahid Afridi and skipper Misbah-ul-Haq to exit the one-day scene.

Test specialist Azhar Ali then led Pakistan to an embarrassing 3-0 whitewash in Bangladesh and 4-1 reverses to both England and Australia before Sarfraz was handed the reins. The wicketkeeper-batsman is credited with injecting new energy after winning three of his first four games, two against the West Indies and one against lowly Zimbabwe.

But former captain Ramiz Raja believes the team lacks the skill-set needed to regularly beat top sides in modern limited-overs cricket, which tilts heavily towards batting. “They say a captain is as good as his team and this side lacks power-hitting skills,” Raja told AFP. “Also to win he needs to find wickets with the new ball. He has to be in control of his emotions—he must have a flexible plan based on discipline to create a winning environment.”

Pakistan squeezed into the eight-team tournament courtesy of their clean-sweep against minnows Zimbabwe in May 2015, while also profiting from England’s whitewashing of the West Indies. But the animated Ahmed, who was often spotted screaming instructions at his fielders during the West Indies series, warned that Pakistan cannot be counted out.

“It’s true we are [ranked] number eight but we are capable of giving a tough time to our opponents,” Sarfraz told AFP. “We will overcome our weaknesses during our preparations in a camp in Birmingham and will be noticed for our fight.”

Pakistan’s biggest task will be matching the big-hitting of other teams. Pakistan is “playing the style or brand that belongs to the 1990s when the game has moved on, so we need a huge lift in that area,” head coach Mickey Arthur said.

For Raja, the problem lies in the number of dot deliveries (balls from which the batting side does not score) that allows the run-rate to dry up. “I would recommend Sarfraz to bat at four or five just to shake things up,” he said.

Veteran Shoaib Malik and all-rounder Imad Wasim will be required to give impetus to the batting line-up. But the team is lacking the services of explosive opener Sharjeel Khan, who is currently facing a tribunal for spot-fixing and could face a life ban if found guilty.

Enfant terrible Umar Akmal, the other batsman seen as capable of consistently clearing the boundary, was kicked out of the squad and sent home for failing two fitness tests.

The bowling department is in better shape. New boy Shadab Khan can spring a few surprises with his leg-spin in an attack led by Mohammad Amir, whose swing and accuracy was almost back to its former best in the West Indies.

Pakistan have never won the Champions Trophy but they reached the semi-finals in 2004 and 2009. On both occasions they got the better of India, their only wins against their bitter rivals in a multi-national ICC event.

For Ahmed, Pakistan’s opener against India will set the tone for the rest of their tournament. “We all know how lively these Pakistan-India matches are, so we will turn up fully motivated to have a winning start,” he said. They also face South Africa, on June 7 in Birmingham, and Sri Lanka on June 11 in Cardiff. The top two teams from each group will qualify for the semi-finals.