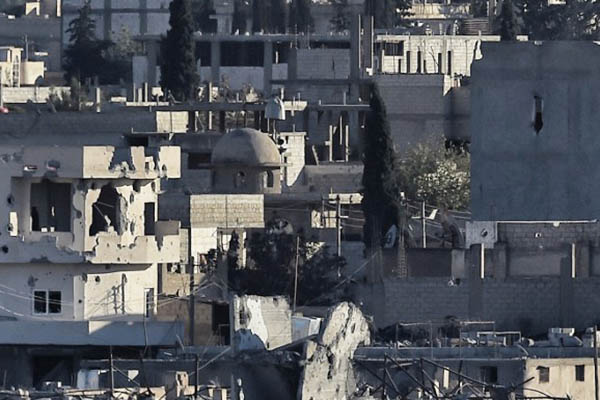 A view of the city of Kobane. Aris Messinis—AFP

U.S. President Barack Obama said Sunday sending more troops to Iraq signals a “new phase” in the fight against the Islamic State group, amid unconfirmed reports its leader has been wounded.

After earlier unveiling plans to send up to 1,500 more American troops to Iraq to advise and train its forces, Obama told CBS News the U.S.-led effort to defeat I.S. was moving to a new stage. “Phase one was getting an Iraqi government that was inclusive and credible—and we now have done that,” Obama told the broadcaster. “Rather than just try to halt [I.S.’s] momentum, we’re now in a position to start going on some offense,” he added, stressing the need for Iraqi ground troops to start pushing back I.S. fighters. “We will provide them close air support once they are prepared to start going on the offence against [I.S.],” Obama said. “But what we will not be doing is having our troops do the fighting.”

Going on the offensive will be a significant challenge for Iraq’s forces, which saw multiple divisions fall apart in the early days of the jihadist June offensive, leaving major units that need to be reconstituted. The extra troops announced by Obama would roughly double the number of American military personnel in Iraq to about 3,100, a significant return of U.S. forces by a president who has hailed his role in their 2011 departure.

A U.S.-led coalition has already been carrying out airstrikes against I.S. in Syria and Iraq, where the extremist group has declared an Islamic “caliphate” in large areas of the two countries under its control. Airstrikes targeted a gathering of I.S. leaders near Mosul late on Friday, the Pentagon said, and Iraqi authorities were seeking to determine whether the group’s chief Abu Bakr al-Baghdadi had been killed or wounded. Despite media reports citing the Iraqi interior and defense ministries as saying Baghdadi was wounded, senior officers from both ministries told AFP that no such information has been confirmed.

“The interior ministry does not have any confirmed information in this regard and we are still investigating,” its spokesman Brig. Gen. Saad Maan said late Sunday. A senior Iraqi army officer also said investigations were ongoing, while a senior intelligence official said earlier there was no “accurate information” on Baghdadi’s fate. “The information is from unofficial sources and not confirmed until now, and we are working on that,” the intelligence official said.

The death of the elusive I.S. leader would be a major victory for the U.S.-led coalition, but officials said it could take time to confirm who was hit in the strikes. “I can’t absolutely confirm that Baghdadi has been killed,” Gen. Nicholas Houghton, the chief of staff of the British armed forces, told BBC television on Sunday. “Probably it will take some days to have absolute confirmation,” he said.

A spokesman for U.S. Central Command, which oversees American forces in the Middle East, also could not confirm if Baghdadi was present at the time of the raid, which he said had intentionally targeted the group’s leadership.

The strikes were a further sign of “the pressure we continue to place on the [I.S.] terrorist network,” spokesman Patrick Ryder said. The aim was to squeeze the group and ensure it had “increasingly limited freedom to maneuver, communicate and command.”

Highlighting the enormous security challenges Iraq faces, a wave of car bombs struck Shia-majority areas of Baghdad on Saturday, killing at least 37 people. I.S., meanwhile, said that a British national had carried out a suicide bombing that killed a senior Iraqi police officer.

A senior officer said Friday that government forces now hold “more than 70 percent” of the town, which is near where Iraqi soldiers have been holding out for months against a jihadist siege of Iraq’s largest oil refinery. The Syrian Observatory for Human Rights, a monitoring group, meanwhile said Sunday that fighting for the border town of Kobane in Syria had now killed more than 1,000 people, mostly jihadists.