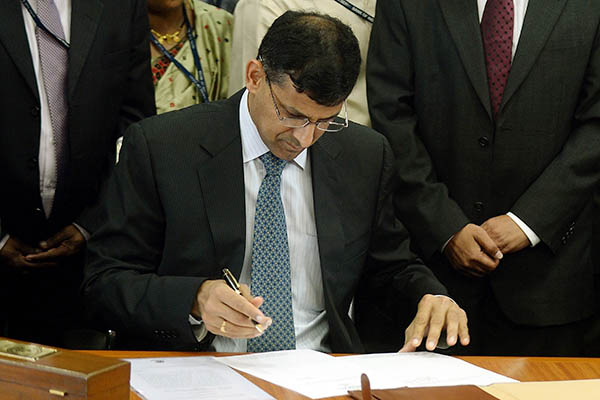 Reserve Bank of India (RBI) chief Raghuram Rajan, who had warned he was prepared to be unpopular, ordered a rise in the benchmark interest rate from 7.25 to 7.50 percent at a mid-quarter policy review in Mumbai.

Rajan had been widely forecast by economists to keep rates on hold despite annual inflation hitting an unexpected six-month high of 6.1 percent this week.

While businesses and the government would like a rate cut to help revive sluggish growth, this would risk pushing inflation higher and further weakening the rupee, which hit record lows in the weeks before Rajan took charge on Sept. 4. Rajan did however relax some exceptional liquidity tightening measures that had been introduced by the RBI in July to try and help stem the rupee’s decline.

The “daily CRR,” the amount banks must deposit with the central bank, was reduced from 99 to 95 percent, while the marginal standing facility—used to lend to commercial banks when there is a shortage of funds in the market—was cut by 75 basis points.

“Now things are back to normal, he is using the policy rate to target inflation and that will allow the rupee to do what it likes,” said Daniel Martin, Asia Economist at Capital Economics.

Nicknamed “The Guv,” Rajan stepped up to the post faced with the unenviable task of propping up a weak rupee, reviving slowing economic growth and curbing rising inflation. “Wholesale Price Index inflation will be higher than initially projected over the rest of the year,” he said in Friday’s statement.

“What is equally worrisome is that inflation at the retail level … has been high for a number of years, entrenching inflation expectations at elevated levels and eroding consumer and business confidence.”

Huge expectations have been riding on the former International Monetary Fund chief economist who famously predicted the 2008 global financial crisis years in advance. India’s media has lionized him, and one top columnist has dubbed him the “Poster Boy of Banking” whose “chiseled features are as sharp as his brain.”

But on his first day in office, Rajan said he might have to take unpopular steps to tackle what some economists have called India’s worst economic crisis in decades. He almost immediately announced a string of measures to liberalize financial markets and support the currency. His efforts to swell foreign exchange coffers have helped the rupee bounce back, reaching around 62 against the dollar, from 67 when he took charge.

The Indian economy has gone dramatically downhill since the “Indian Summer” of the last decade, when annual growth rates regularly topped eight and nine percent. It grew by five percent last year, it’s slowest pace in a decade, and some private economists forecast expansion this year at under four percent.

Meanwhile, the Congress-led government has become mired in graft scandals and policy paralysis that have sunk its popularity and sent foreign investors fleeing. India’s public finances are also in trouble with the current account deficit—the broadest measure of trade—hitting a record high last year.