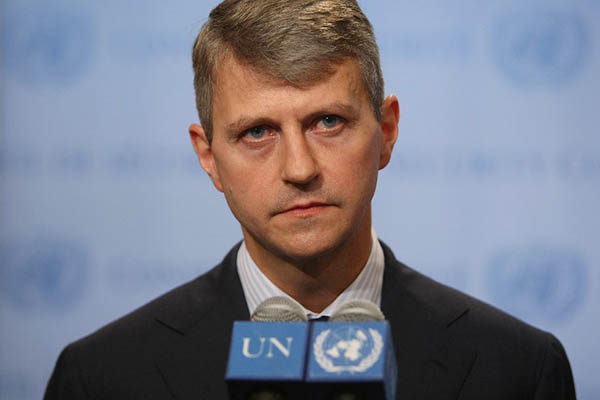 France’s Jean-Pierre Lacroix has been appointed to the post for a year.

U.N. Secretary-General Antonio Guterres on Tuesday announced the appointment of Jean-Pierre Lacroix of France to head U.N. peacekeeping for a year pending a review of the world body’s functions and structure.

The U.N.’s political affairs chief, Jeffrey Feltman of the United States, will remain at that post, also for a year. The two under-secretary-general positions are among the most high profile at the United Nations.

Lacroix, 56, will replace Herve Ladsous who steps down in March after six years in the top job.

Currently director for the United Nations at the French foreign ministry, Lacroix will take over U.N. peacekeeping as it struggles to overcome a scandal over mounting cases of sexual abuse by troops serving in peace missions.

The United States, the biggest financial contributor to U.N. peacekeeping, is considering cuts to its contribution, currently at 29 percent of the $7.9 billion budget for 2017.

Guterres took over from Ban Ki-moon on Jan. 1 with a pledge to reform the United Nations to improve its capacity to address global crises and prevent conflicts.

The U.N. chief said in a statement he is setting up an internal review team to look at the world body’s peace and security strategy, functioning and architecture. That team led by Tamrat Samuel of Eritrea will submit recommendations by June.

The push for reform comes amid criticism from some U.N. member states over the appointment of nationals from Security Council permanent members to top posts at the United Nations.

France, which strongly supported Guterres during his bid to become secretary-general, and the United States are permanent council members along with Britain, China and Russia.

French Ambassador Francois Delattre praised Lacroix as an “excellent diplomat,” and said his appointment “illustrates the fact that France is one of the major players in peacekeeping.”

“This appointment is therefore good news for the United Nations,” said Delattre.