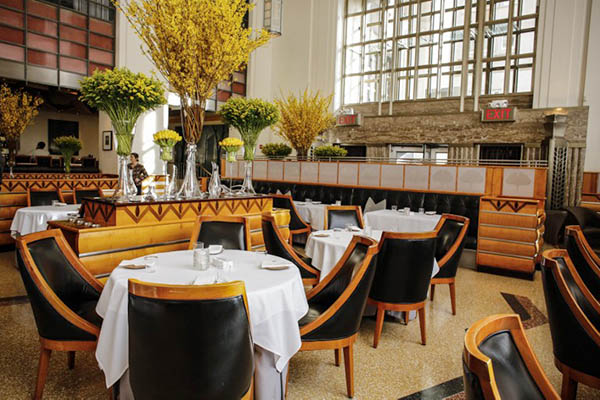 The highest-ranking French restaurant, Mirazur—in the Riviera town of Menton—came fourth a year after French chefs protested the list’s paucity of talent from the country famed for gastronomy.

“I don’t know how I feel right now but I’m overjoyed,” said an emotional Humm, who was praised for his multi-course fine dining menu celebrating New York’s rich history and culinary traditions. “I’m so proud to be up here,” he told the glitzy ceremony in Melbourne, Australia. “When I first started cooking 25 years ago, I never in my wildest dreams would have thought I’d find myself in this position.”

Eleven Madison Park, where an eight-to-10 course tasting menu costs $295 per head—excluding wine and taxes—is the first American restaurant to head the list since California’s French Laundry in 2004. Humm’s restaurant also has three Michelin stars—considered the most prestigious honor in the world of fine dining—and came third on the World’s 50 list last year.

In a city packed with high-end restaurants, reservations may be relatively obtainable but all bookings are pre-paid.

The restaurant is offering an 11-course menu highlighting some of its most significant dishes—an experience that lasts roughly three hours—from April 11 to June 9, when it will close for renovations. Unusually for New York, where the tipping culture is firmly entrenched, gratuities are not accepted.

The organizers said Eleven Madison Park enhanced the dining experience “with a sense of fun, blurring the line between the kitchen and the dining room.”

The top 10 was rounded out by restaurants in Peru, Thailand, Austria and Spain. France, Spain and the United States dominated the top 50 with six restaurants each, while establishments from China, Chile, Hong Kong and Singapore also made the grade.

The acclaimed British chef Heston Blumenthal, whose restaurant The Fat Duck in Berkshire just outside London is a former winner of the top award, received a lifetime achievement gong.

Organizers said it was hard to think of another chef who had more impact on the way the world cooks. “Many of the world’s greatest restaurants use methods derived from Blumenthal and his development team’s ground-breaking research,” they said.

Blumenthal, who has brought his recipes to millions through TV shows broadcast around the world, said he had no plans to slow down. “I consider the past 20 years my apprenticeship,” he said. “I’m only just getting started.”

This year’s World’s 50 Best Restaurants ceremony marked the first time the British-based list held the awards outside London or New York, as it seeks to make the event more global—and Australia is quickly earning a reputation as a serious food destination. Run by the trade magazine Restaurant, the awards began in 2002 and have since become a reference for the world’s foodies.

However, they were hit by allegations of cozy deals between eateries and jury members in 2015.

Last year, a row blew up about the exclusion of top French chefs. The rankings have also been criticized for honoring few female chefs. Women took just three of the 50 spots this year, one more than in 2016.

The jury comprises just over 1,000 “independent experts,” including food writers, chefs and restaurant owners, who list their choices in order of preference based on where they ate in the past 18 months.