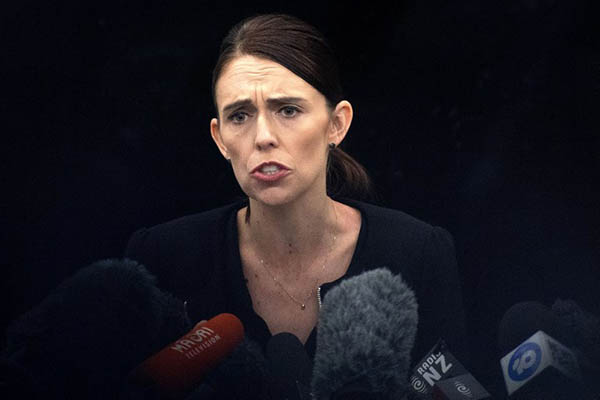 The move comes less than a week after a white supremacist rampaged through two mosques killing 50 people as they prayed, sparking global revulsion. “Every semi-automatic weapon used in the terrorist attack on Friday will be banned in this country,” Ardern told a press conference.

Legislation will be introduced in parliament when it meets in early April, but an interim measure means a ban on new purchases has—for practical purposes—already been enacted.

Reaction in the still-shocked country was positive.

“It’s a good thing, why would we need to have guns like this in our houses?” Kawthar Abulaban, 54, who survived the shooting at Al Noor mosque said. “The semi-automatics, why would you keep that inside your house? It’s not right.”

Alleged shooter Brenton Tarrant livestreamed the carnage in real-time, and the horrific scenes have prompted global concern over access to guns and the use of social media by extremists.

New Zealand’s ban looked likely to intensify the gun debate, with Twitter blowing up almost immediately after the announcement as Americans and others around the world praised Ardern’s quick action, while American gun supporters called for defense of their constitutional right to bear arms. U.S. Senator Bernie Sanders and Congresswoman Alexandria Ocasio-Cortez joined the praise for the ban. “This is what real action to stop gun violence looks like,” Sanders tweeted. “We must follow New Zealand’s lead, take on the NRA [National Rifle Association] and ban the sale and distribution of assault weapons in the United States.”

No reaction was immediately seen on the feed of U.S. President Donald Trump.

For a second day, hundreds of mourners gathered under grey skies in the shattered city to lay to rest more dead, including a local convert to Islam and an elderly man who died trying to greet his white supremacist killer.

Amid the prayers and sobs there were Muslims, non-Muslims, schoolchildren and even at one point a phalanx of bikers.

Pupils wept and embraced as they said goodbye to 14-year-old Sayyad Milne and 24-year-old Tariq Omar. Sayyad’s father John Milne said his son was gunned down while praying at Al Noor, the first of the two mosques attacked.

Milne, who was at Thursday’s funeral, had previously described his son as “my special little one” who longed to play for Manchester United.

Mourners arrived at the cemetery in long lines, schoolgirls struggling to keep scarves on their heads in windy conditions. A mournful cry of “Allahu Akbar” over a loudspeaker signaled that the service had begun. Mourners prayed before lifting the two victims above their heads and carrying them to their graves.

Many shed tears, and held one another for support, as they left the cemetery following the ceremonies.

New Zealanders had already begun answering government appeals to hand in their weapons, prompting a barrage of derogatory messages online—most apparently from the U.S. pro-gun lobby.