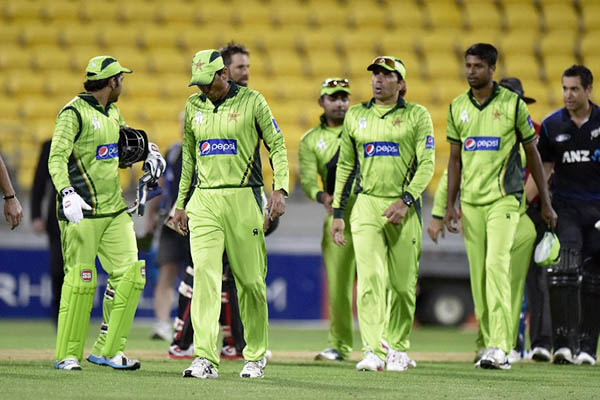 New Zealand cruised to a seven-wicket win over Pakistan in the first of their two one-day internationals in Wellington on Saturday.

“It was probably the best we’ve seen all summer and that creates so much intensity and allows the seamers to be able to really get into the game,” he said. “Obviously the run chase was very well planned by Grant [Elliott] and Ross [Taylor].”

The comfortable victory for New Zealand underscored Pakistan’s lack of preparation two weeks away from the start of the World Cup. It was their first ODI since they were beaten 3-2 in a home series against New Zealand before Christmas, and the lack of match play was evident from the moment they lost the toss and were put in to bat.

The batsmen lacked timing and later the bowlers struggled with direction against a New Zealand side which had just completed a 4-2 series win over Sri Lanka.

Pakistan skipper Misbah-ul-Haq believed they were about 70 runs short of a competitive total. “In the first 10 overs we were nowhere, we had no momentum,” he said. “They bowled really well and we just kept on losing wickets. I think 280-290 could have been a competitive total on this pitch.”

New Zealand launched into their chase at more than six runs an over with McCullum, returning to the line-up after sitting out the last game against Sri Lanka, blasting a rapid 17 before he was gone in the fourth over. Tom Latham fell for 23 and Martin Guptill, who struggled against the Sri Lankans, found the less pressured Pakistani bowling more to his liking as he posted 39.

He was gone just after New Zealand passed the 100 mark in the 18th over, 11 overs quicker than it took Pakistan to reach three figures. Elliott and Taylor then led New Zealand home, adding 112 in an unbeaten fourth wicket stand.

Pakistan’s innings only nudged over the 200 mark thanks to a 71-run partnership in 38 balls by Haq and all-rounder Shahid Afridi.

Kyle Mills bowled Mohammad Hafeez with the fifth ball of the match, which started a slide that saw Pakistan at 127-6 in the 36th over before Haq (58) and Afridi (67) provided a little backbone. But when Haq went it started another slide with the last four wickets falling for 12 runs.

The New Zealand bowlers were not menacing on the two-paced wicket although Mills found plenty of movement and was also rewarded with the wicket of Younis Khan for nine. Trent Boult had Ahmed Shehzad caught behind for 15 and Haris Sohail (23), Umar Akmal (13) and Sarfraz Ahmed (five) quickly followed before Afridi took hold of the attack.

He offered one chance on 14, when he was dropped by McCullum, as he flayed away for his 67 in 29 deliveries.

Elliott, who took the wicket of Haq and mopped up the tail, was the most successful New Zealand bowler with three for 26 while Mills, Trent Boult and Corey Anderson took two apiece.