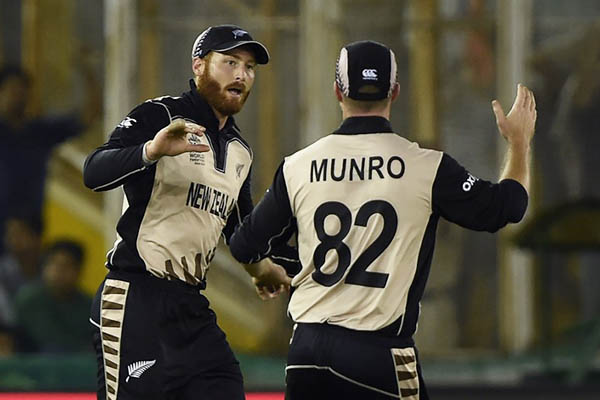 Following loss to Black Caps, Pakistan’s chances of advancing in the tournament are virtually nil.

New Zealand opener Martin Guptill credited an aggressive approach for his side’s 22-run demolition of Pakistan in a key World Twenty20 game in Mohali on Tuesday.

Guptill, 29, led the charge with a 48-ball 80 as the Black Caps restricted Pakistan to 158-5 off 20 overs after posting a strong 180-5 on a sporting track at the Punjab Cricket Association ground. The win extended the Kiwis’ unbeaten streak in the tournament. It also ensured a place for them in the last four, their second semi-final of a global event in the past year.

“We found early that the wicket was better than what we had been playing on. We wanted to be aggressive and it paid off for us today,” said a beaming Guptill who was named man-of-the-match. “We put up a decent total and then the bowlers came up and did the job.”

Pakistan opener Sharjeel Khan had threatened to run away with the game after a blistering 25-ball 47 but his dismissal in the sixth over helped the Black Caps claw back on the back of some disciplined bowling and fielding. Kiwi captain Kane Williamson was all praise for his rookie spinners who have been the talk of the tournament for their guile and skill.

“They [spinners] have been very consistent, very smart,” said Williamson. “We played on a couple of wickets that spun viciously. And then we came here and they adapted nicely on a wicket that didn’t offer a huge amount of spin. The way the guys adjusted again on a different surface was very good.”

Sharjeel Khan gave Pakistan a flying start, hitting nine fours and a six, but the rest of the batsmen failed to rise up to the task. Khan’s sparkling innings came to an end when he holed to Guptill off Adam Milne, and it was all downhill thereafter for Pakistan.

Guptill was the star of the show, smacking three sixes and 10 fours in his matchwinning knock after Williamson won the toss and elected to bat. Ross Taylor chipped in with an unbeaten 23-ball 36 to help his side put up a strong total on the board.

After a tentative start, Guptill smacked a huge six and a boundary off left-arm paceman Mohammad Irfan in the second over to set the pace for his innings. Irfan’s new ball partner Mohammad Amir was not spared either, whacked for three fours by Guptill, the last two off consecutive balls.

The Kiwis raced to 62-0 off eight overs before Williamson was caught off Irfan for 17.

Pakistan struck again soon with captain Shahid Afridi (2-40) sending back new batsman Colin Munro (seven) in the first over that he bowled.

Guptill appeared unruffled as he raced to his 10th half-century in T20 internationals with a couple off Afridi, prompting a standing ovation from his teammates in the dressing room. But just as Guptill looked set for a bigger score, he chopped on to his stumps off Mohammad Sami, who was most impressive among the bowlers with figures of 2-23.

Pakistan’s chances of advancing in the tournament now appear slim with their second defeat in a row. “Shehzad and Sharjeel started off very well but we didn’t utilize the start,” said a dejected Afridi. “We keep repeating the same mistakes and in this format you win only if you make less mistakes. But in every game we keep making mistakes, it’s not good for the team.”