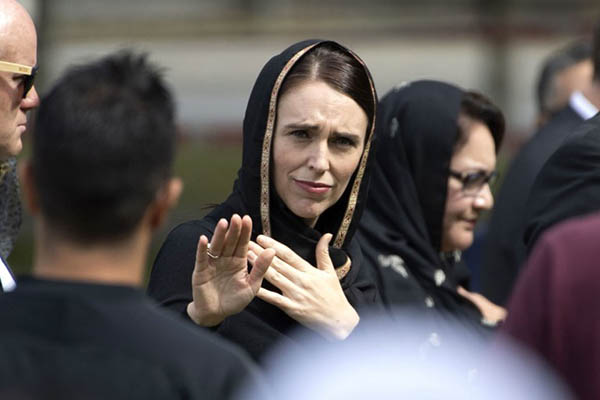 The Muslim call to prayer rang out across New Zealand on Friday followed by two minutes of nationwide silence to mark a week since a white supremacist gunned down 50 people at two mosques in the city of Christchurch.

As the call was broadcast around the country, thousands—including Prime Minister Jacinda Ardern and wounded survivors—stood in a park opposite the mosque where the killing began, as the nation of 4.5 million came to a standstill.

New Zealand is still in shock following the killings by alleged shooter Brenton Tarrant, a 28-year-old Australian national who had hoped to foment an ethnic war with his attacks. But horrified Kiwis have responded with outpourings of love, with many embracing their Muslim neighbors on Friday in moving scenes across the country.

A muezzin in white skullcap issued the call to regular Friday prayers at 1:30 p.m. with chants of “Allahu Akhbar” (God is greatest) as thousands listened in Christchurch’s Hagley Park, across from the Al Noor Mosque.

The country then fell silent for two minutes, with public gatherings in Auckland, Wellington and other cities.

In neighboring Australia, people stopped in the streets and in shops to mark the moment.

Al Noor imam Gamal Fouda then took to the lectern at Hagley Park to denounce the “evil ideology of white supremacy” and praise Kiwis for their support. “I look out and I see the love and compassion in the eyes of thousands of fellow New Zealanders and human beings from across the globe,” Fouda said. “This terrorist sought to tear our nation apart with an evil ideology… But, instead, we have shown that New Zealand is unbreakable.”

The Al Noor mosque remains closed as workers repair bullet-pocked walls and clean blood-spattered floors. But after Friday’s prayers, the somber mood outside lightened markedly as non-Muslims approached the mosque to lay flowers or embrace and take selfies with Muslims.

Koro Tini, a 46-year-old Maori man with elaborate traditional facial tattoos and ceremonial native cloak, embraced and touched noses with a man who was among a group of Muslim worshippers. “We weren’t meaning to pose for pictures but people wanted to do it after the prayers. There’s a sense of joy and rejoicing,” Tini said.

Many women across the country wore headscarves in solidarity with Muslims. “I can take my scarf off if I feel afraid. They cannot,” said Kirsty Wilkinson, who came to Hagley Park with two friends, all in make-shift hijabs. “The message I want to send is that hate cannot win.”

Tarrant took advantage of relatively lax New Zealand gun laws to acquire military-style weapons that he used to mow down 50 men, women and children—ranging in age from three years to 77—and leaving dozens injured in an attack live-streamed online.

New Zealand police revealed on Friday that in October 2017 they met with Tarrant at his home and conducted a “security inspection” as part of the gun license approval process. The “correct process” was followed and the license was granted, a police statement said.

Tarrant is in police custody and has been charged with murder.

Ardern on Thursday announced an immediate ban on assault rifles and military-style semi-automatic weapons, making good on a pledge to rid the country of the kinds of weapons the gunman used.

Police said that by Friday morning more than 1,000 people had contacted them about handing in firearms now in private possession, which are now outlawed and must be turned in under a government buyback scheme.

Major New Zealand newspapers published special tributes on Friday, with the front page of Christchurch daily The Press bearing the Arabic word “Salam” (Peace) and the names of the 50 killed. The national mourning and moment of silence were broadcast on television networks, radio and across multiple local media websites.

“We are so happy that this prayer will be broadcast to the entire world so that everyone can be part of it,” Mustafa Farouk, president of the Federation of Islamic Associations of New Zealand, said in a statement announcing the prayer session.

Burials also resumed on Friday in Christchurch, with 26 people expected to be laid to rest, ranging from three-year-old Mucaad Ibrahim to 77-year-old Muse Awale. Salwa Mustafa, who lost her husband Khalid and 15-year-old son Hamza in the massacre, had defiant words despite her devastating loss. “People say that… Muslims are terrorists. The whole world saw who is the terrorist,” she said of the shooter. “Muslims are people of peace and love, not terrorists. And I hope the whole world now can understand the real Islam, the reality of Islam.”