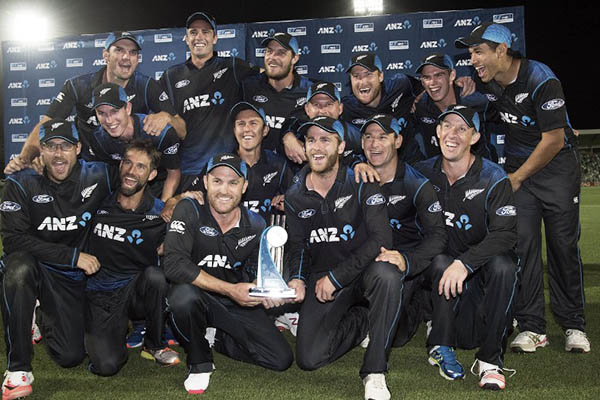 Black Caps scored 369, their highest ever against Pakistan.

New Zealand flayed Pakistan’s attack on the way to a crushing 119-run win during the second one-day international in Napier on Tuesday.

The win means the Black Caps take the series 2-0 and maintain momentum ahead of this month’s World Cup, while Pakistan look in disarray after two poor displays.

The New Zealanders ran riot after winning the toss and electing to bat, ending their innings at 369 for five, their highest ever score against Pakistan. Kane Williamson top-scored with 112, Ross Taylor finished 102-not out with a boundary off the last ball and opener Martin Guptill also contributed 76.

In contrast, Pakistan medium pacer Bilawal Bhatti recorded the worst bowling figures in the country’s ODI history, allowing 93 runs off his 10 overs without taking a wicket.

Bhatti was far from the only underperformer and captain Misbah-ul-Haq said his team needed to make huge improvements for the World Cup. “We’re nowhere near our best. We need to improve a lot in virtually everything, we need to improve our batting and bowling, and especially the death bowling.”

His New Zealand counterpart Brendon McCullum was thrilled at his side’s form ahead of the tournament, where they are looming as a dark horse. “We’ve got to be happy with where we’re at,” he said. “We’ve played, I guess, a couple of perfect games. The challenge for us now is to maintain that freshness and momentum we’ve built up.”

The 369 total was the Black Caps’ fifth highest in one-day history, surpassed only by scores against second-tier nations Zimbabwe and Canada.

Pakistan’s batsmen could only manage 250 in reply before they were bowled out in 43.1 overs, although they were chasing the game after a dismal bowling effort.

Only Wahab Riaz in 2013 has conceded as many runs as Bhatti in 10 overs, but he at least took two wickets against South Africa.

Ehsan Adil fared little better against the New Zealanders, taking one wicket but going for 8.5 an over. Mohammad Irfan was the sole bowler who appeared remotely threatening, finishing with two for 52.

With Pakistan’s front-line attack failing, Haq was forced to call on his part-timers. But Younis Khan, Haris Sohail and Ahmed Shehzad had no answers, taking only one wicket between them at the cost of 93 runs.

McCullum set the tone for the hosts with a typically aggressive cameo of 31 before Guptill and Williamson brought up New Zealand’s 100 off 18.2 overs. They both cruised to half centuries, with New Zealand on 152 at the half-way mark.

Williamson stepped on the gas after Guptill was dismissed for 76, moving from 63 to 100 in the space of eight overs. The 24-year old finally fell for 112 to Irfan but Ross Taylor then stepped in to club a 70-ball century in his 150th one-day international, smashing Bhatti onto the roof of the stands.

Taylor appeared in danger of remaining stranded in the 90s in the final over, but a six and a four in the final two balls took him to 102.

Pakistan’s openers Mohammad Hafeez and Shehzad made an excellent start chasing down the mammoth total, notching half centuries at a little over a run a ball. Shehzad went for 52 dancing down the wicket to attack spinner Nathan McCullum but holing out to the man on the boundary. Younis Khan could only manage 11 as the run rate steadily crept higher, reaching almost 9.6 at the half-way mark.

Hafeez (86) and Shahid Afridi (11) both went as they lashed out trying to lift the pace and when Haq departed on 45 it was all over.

It seems pakistani team going to WC mission without any bowler. it is request to pakistan PM to spend these over expenses on poverty of pakistan.