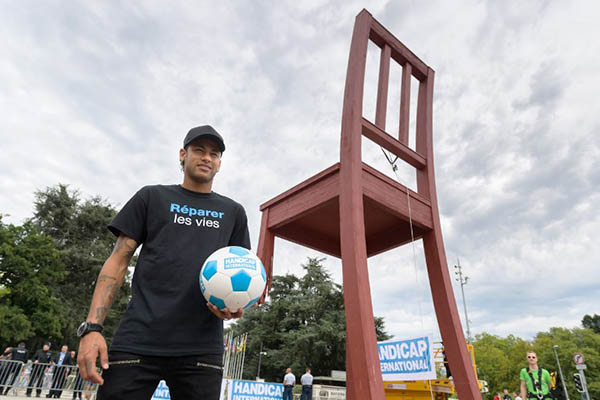 Neymar-mania, which has engulfed France, landed briefly in neighboring Switzerland on Tuesday where the Brazilian star became Handicap International’s first-ever ambassador at a ceremony at the United Nations in Geneva.

Paris Saint-Germain’s new prize acquisition told reporters the opportunity to work with the organization that advocates for the rights of disabled people marked “a unique moment” in his life.

The event saw the 25-year-old forward elevated to the top of the giant “Broken Chair” monument, which sits in the main square outside the U.N.’s European headquarters. Perched at the top of the monument—erected two decades ago to honor those mutilated by landmines in conflict—Neymar dribbled and kicked balls into the small crowd assembled below, sending a few over the guarded gate of the U.N. compound.

Speaking later to reporters inside the U.N., Neymar said his precise role with Handicap International had not yet been hammered out, but voiced hope it would “be a successful partnership.”

Handicap International said the footballer’s mandate would be advocate for the rights of “people with disabilities in poor countries, victims of natural disasters and conflicts.”

Neymar earned rave reviews for his goal-scoring debut with PSG this week, which followed a record 222-million-euro transfer from former club Barcelona.