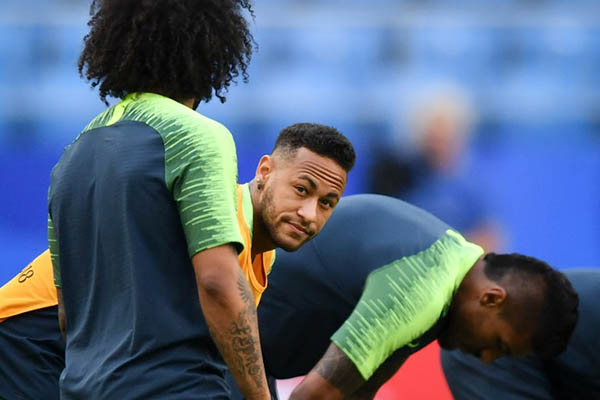 Neymar scored a stylish opener and set up substitute Roberto Firmino for a late second as Brazil cruised into the quarter-finals of the World Cup with a 2-0 win over Mexico on Monday.

Bidding for a record-extending sixth title in Russia, Brazil weathered an early storm at Samara Arena before Neymar turned on the style to underline their status as favorites.

Brazil will now meet the winners of Monday’s later match between Belgium and Japan, but after seeing Argentina, Spain and Portugal eliminated in the last 16, Tite’s men will fancy their chances. “We have to learn to suffer and we did suffer, it was a tough match,” said Neymar. “We knew they were a high-quality opponent.”

Mexico made a bright start in their attempt to beat Brazil in a World Cup match for the first time. But after dominating the first 20 minutes of an entertaining opening period, Brazil came back into the match, bossing the final stages of the half.

The match had been billed as a duel between Neymar and Javier Hernandez, but the West Ham striker was more noticeable for his platinum-dyed blond hair, a choice also made by central defender Carlos Salcedo, before being replaced in the second half.

Brazil awoke from their early slumber late in the opening half, but Neymar’s angled drive was blocked by Guillermo Ochoa and striker Gabriel Jesus saw the keeper block his drive after a smart one-two. After the interval Mexico lost drive and focus and Neymar broke the deadlock on 51 minutes.

The Paris Saint-Germain star drew several defenders as he ran across the edge of the area with the ball at his feet. He laid it off for Willian and darted into the box, stretching to convert the Chelsea midfielder’s superb delivery.

Mexico were on the ropes, but Casemiro spurned a great chance to stretch Brazil’s lead, seeing his shot blocked by Ochoa.

Osorio replaced the ineffective Hernandez with Raul Jimenez on the hour and Alisson dived to tip over Carlos Vela’s curling drive. But Brazil had moved up a gear. Neymar was starting to showcase his talents but he was left writhing in pain after a tussle with second-half replacement Miguel Layun.

Brazil secured victory when Neymar turned provider in the 88th minute, finding Firmino in the box and the Liverpool forward made no mistake.