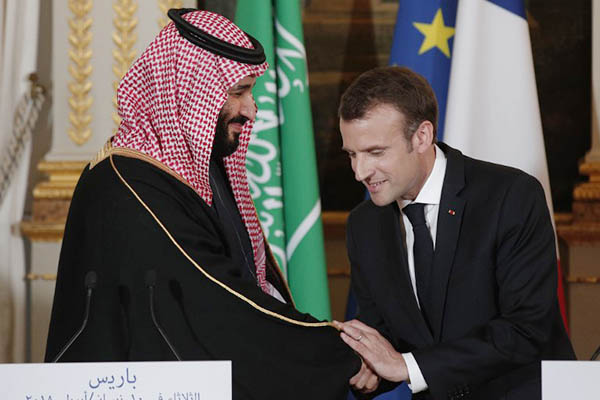 A group of NGOs on Thursday urged France to suspend the sale of arms to Saudi Arabia and to work for a political solution in Yemen, which has been ravaged by four years of conflict.

“I don’t know how many more Yemenis have to die, be injured or go hungry before the world decides that the war must end,” Radhya Almutawakel, head of Yemen Mwatana human rights organization told a press conference in Paris. “Peace is possible, but it never happens because the rest of the world doesn’t care. The international community must put pressure on all parties and stop feeding the conflict by selling arms to Saudi Arabia,” she added

March 26 will mark the fourth anniversary of the intervention in Yemen of a coalition led by Saudi Arabia and the United Arab Emirates (U.A.E.)—with logistical and political backing of the United States—in support of the government in the struggle against Houthi rebels supported by Iran.

An estimated 10,000 people have been killed since March 2015, though rights groups put the toll much higher. “All sides of the conflict are committing human rights violations,” said Almutawakel.

The French government insists that the arms it sells to Saudi Arabia are strictly controlled and don’t play a part in the conflict in Yemen.

However, an Amnesty International representative in France Aymeric Elluin urged France to “follow the German example.”

Khashoggi, a Washington Post contributor and critic of Saudi Crown Prince Mohammed bin Salman, was murdered at the Saudi consulate in Istanbul on Oct. 2.

The NGOs meeting in Paris also called for aid to be sent urgently to Yemen. “Humanitarian aid is vital, but NGOs are increasingly hampered by security and administrative obstacles,” said Care France’s Fanny Petitbon.

Meanwhile, another French NGO announced it has filed a lawsuit against former members of the French Foreign Legion accused of acting as U.A.E. mercenaries and carrying out assassinations in Yemen.

The International Alliance for the Defense of Rights and Liberties (AIDL), founded by exiled Yemen journalist Mohamed Al Shami, lodged the complaint with a Paris court for “war crimes” and “participating in mercenary activity.”

Nine former Legionnaires are cited in the court papers, seen by AFP, as members of a group led by two U.S. mercenaries alleged to have carried out more than 20 targeted killings. The plaintiffs claim their recruitment was organized by Mohammed Dahlan, a former head of security in the Palestinian Gaza Strip who is now an adviser for the Saudi crown prince.

It is brave of Newsweek Pakistan to speak of this cruel aggression by Saudi Arabia against the non combatants living in a smaller, weaker neighbouring country.