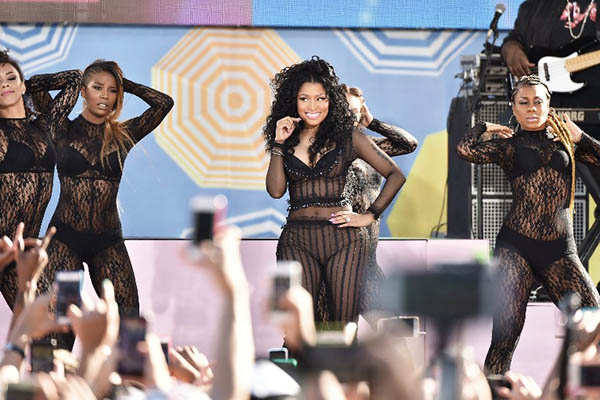 Pop star tells fans that if they have verifiably high grades, she will pay for their tuition

Hip-hop star Nicki Minaj has promised to pay university tuition for dozens of fans after a promotional contest metamorphosed over Twitter.

Minaj’s transformation into educational benefactor took place over the weekend as she unveiled a contest of the sort popular among celebrities seeking an online buzz. Minaj invited her 20 million Twitter followers to make their own videos for one of her new songs for a chance to win a trip to Las Vegas to see her perform at the Billboard Music Awards later this month. But when one respondent said she would rather have help paying tuition, Minaj agreed.

“Show me straight A’s that I can verify with your school and I’ll pay it. Who wants to join THAT contest?!?! Dead serious,” she tweeted.

Minaj soon had made promises in response to more than 30 tweets seeking help paying university tuition, which can be notoriously expensive in the United States, or to cover student loans or textbooks. One Twitter user—whose handle is Dash Minaj in apparent tribute to the rapper—was overjoyed after she pledged to pay the $1,800 he said he needed to resume his studies at Ohio University. “My idol is paying for me to go back to school. I’m literally in… tears,” he tweeted.

Minaj ended the spree by tweeting, “It’s been fun. Let me make those payments tomorrow then see if I have any money left. I’ll do some more in a month or two.”

Minaj, who was born in Trinidad and raised in New York, won a spot at the city’s prestigious public LaGuardia High School for aspiring artists and did not go on to university. In March, the 34-year-old Minaj surpassed Aretha Franklin as the female artist who has had the most songs on the Billboard Hot 100 chart of top U.S. singles.

Minaj has landed 76 songs on the chart after releasing three singles in March, including her latest collaboration with superstar Drake. Forbes magazine estimated that Minaj earned $20.5 million in the 12 months to June 2016, making her the only woman among the year’s richest hip-hop artists.