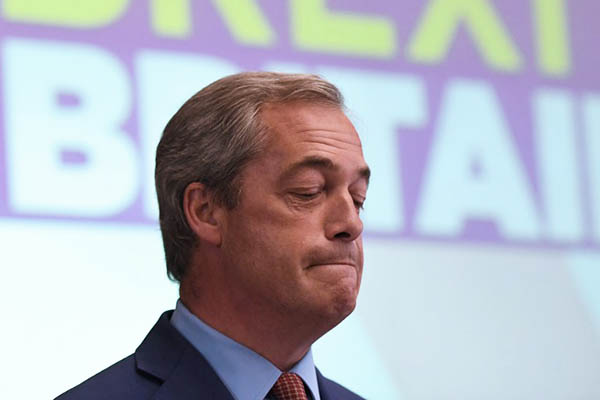 Pro-Brexit campaigner and European Union lawmaker claims his political ambition has been fulfilled with ‘Leave’ victory.

Euroskeptic Nigel Farage, a major driving force behind Britain’s vote to leave the European Union, on Monday stepped down as leader of the U.K. Independence Party (UKIP).

“I have decided to stand aside as leader of UKIP,” the member of the European Parliament told a London press conference. “The victory for the ‘Leave’ side in the referendum means that my political ambition has been achieved.”

The 52-year-old said that whoever succeeded David Cameron as prime minister should be a long-time Brexit campaigner and vowed to scrutinize negotiations over Britain’s departure from the E.U.

“I will watch the renegotiation process in Brussels like a hawk and perhaps comment in the European Parliament from time to time,” he said. “Whilst we will now leave the European Union the terms of our withdrawal are unclear,” he added. “If there is too much backsliding by the government and with the Labour party detached from many of its voters, then UKIP’s best days may be yet to come.”

He also offered his services to “other independence movements springing up in other parts of the European Union,” adding he was “certain that you haven’t seen the last country that wants to leave the E.U.”

Farage has quit as party leader twice before, firstly in 2009 over party infighting and again in 2015 after failing to become an M.P., but on both occasions decided to stay. He insisted on Monday that “I won’t be changing my mind again, I promise you.”