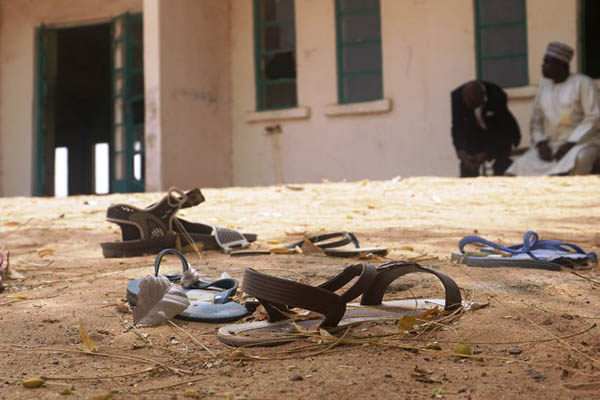 More than 100 girls missing for a week after a Boko Haram attack on their school in northeast Nigeria were kidnapped, the government said for the first time on Monday.

The authorities in Abuja had previously stopped short of saying the 110 girls were seized during the raid on the Government Girls Science and Technology College in Dapchi last Monday. The attack has revived painful memories in Nigeria of the mass abduction of 276 girls from another boarding school in Chibok in April 2014. Nearly four years on, 112 are still being held.

President Muhammadu Buhari said his government was determined to ensure the release of everyone taken by the Islamist militants and to bring “the abducted girls to their families.”

“This is especially against the backdrop of the recent incident where another group of girls were abducted on Jan. 19 from the Government Girls Science and Technical College in Dapchi, Yobe state,” Buhari told a reception in Abuja for former captives of jihadists.

Buhari added that he had ordered the country’s security agencies to ensure the safety of schools and students.

Nigeria’s reluctance to admit the kidnapping comes in part due to Chibok, whose shadow hung over the previous administration and many believe contributed to its election loss. Buhari, a former military ruler, was elected in 2015 on a promise to end the Boko Haram insurgency, which since it started nine years ago has claimed at least 20,000 lives.

The abduction in Dapchi comes after repeated claims from the military and government that Boko Haram was on the verge of defeat. It has led to questions about the extent of the government’s grip on security and why promises to improve security of schools appears not to have been implemented, despite Chibok.

The jihadists want to establish a hardline Islamic state in northeast Nigeria. It has used kidnapping as a weapon of war, seizing thousands of women and young girls as well as men and boys of fighting age.