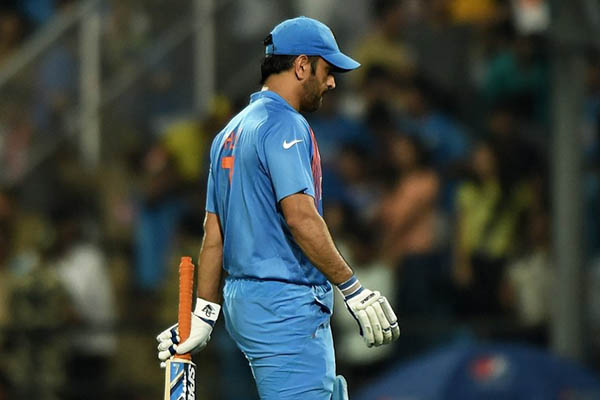 India brought down to Earth by defeat to New Zealand in World T20 opener.

World Twenty20 hosts India were accused of complacency on Wednesday after the tournament’s red-hot favorites were brought down to earth in a stunning opening-match defeat to New Zealand.

After winning 10 of their last 11 matches, India were bowled out for just 79—their lowest total on home turf—by an unheralded New Zealand team who had made a below-par score in Nagpur late on Tuesday. All of India’s leading batsmen had been in fine form in the lead-up to the tournament but on a turning pitch, they were unable to cope with a trio of New Zealand bowlers, including the rookie Mitchell Santner.

The left-arm spinner, who has been playing international cricket for less than a year, took four for 11. Ish Sodhi, a 23-year-old leg break bowler who was born in northern India, took three for 18 in his four overs.

As a procession of batsmen trudged back to the pavilion, the stadium rapidly emptied before India were put out of their misery in the first ball of their penultimate over.

Indian skipper Mahendra Singh Dhoni, who top-scored with 30, felt let down by his fellow batsmen who had been expected to comfortably chase down the Black Caps’ meager total of 126. “There were quite a few soft dismissals and there was no partnership at all,” said Dhoni in his post-match press conference. “The bowlers did a good job by restricting them to 126. I feel it was the batting department that could have done slightly better… It was a 140 wicket.”

The Times of India said Dhoni’s side had been guilty of complacency and that the dismissal of big-hitting opener Rohit Sharma, who was stumped well outside his crease for just five, pointed to a wider malaise. “A target of 127 seemed too easy and there was a sense of complacency about the way India went about their chase,” said the newspaper. “Sharma, [who]… seemed to be out on an evening stroll, characterized India’s lack of application.”

The Hindustan Times said veteran batsman Yuvraj Singh’s refusal to walk until after he was clearly caught and bowled by Nathan McCullum was “the most embarrassing moment” on “a night of humiliation.”

The Indian Express said the result was more than a simple wake-up call but rather “like being dunked by cold water on a bone-chilling night.”

It also went a long way to prove there is life after Brendon McCullum following the inspirational Black Caps skipper’s retirement last month.

New Zealand’s batsmen also struggled against India’s spinners and their top score was a streaky 34 by Corey Anderson. But Santner said that the New Zealand bowlers had taken heart from seeing how much the ball had been turning.

“We knew it was going to be a hard-fought game… We stuck to our plan and managed to get wickets at crucial times,” said Santner. “Every time you beat India at home is a tough effort and we managed to do that today. It’s a bit of a confidence-booster and there are a lot of positives to take out of this game but a couple [of things] to work on as well,” he added.

The 47-run victory sets New Zealand up nicely for their next match on Friday night against their neighbors Australia in Dharamsala.

India’s next match is on Saturday in Kolkata against Pakistan, who have struggled of late but have a good record at the Eden Gardens stadium.

Dhoni backed his team to bounce back swiftly against their rivals. “What’s important is how to turn around and how to come back strong and I feel this team has done this plenty of times,” he said.