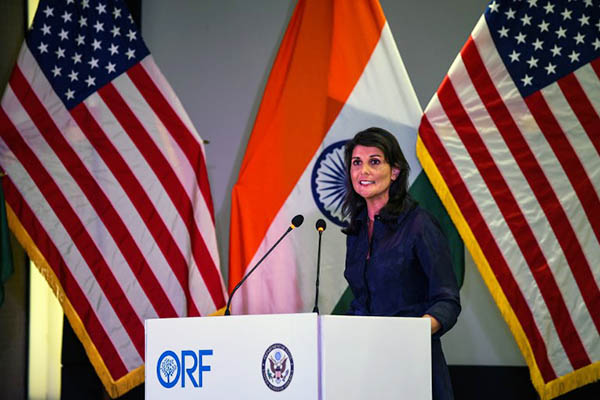 U.S. envoy to U.N. says she has urged P.M. Modi to reassess his nation’s linkages to Tehran

U.S. Ambassador to the U.N. Nikki Haley on Thursday urged India to reconsider its ties to Iran, one of its key energy suppliers, as fresh U.S. sanctions on buyers of Iranian oil loom.

Washington has stepped up pressure on major Iranian customers to stop importing its oil, warning no trading partner will be exempt from new economic sanctions when they bite from Nov. 4.

India imports the overwhelming majority of its oil and Iran is the third-largest supplier to the nation of 1.25 billion.

Haley said she understood India “can’t change its relationship with Iran in a day” but said she used a meeting with Prime Minister Narendra Modi in New Delhi to encourage a reassessment. “I also think for the future of India, and the future of being able to get resources and who they’re dependent on, I would encourage them to rethink their relationship with Iran,” she told broadcaster NDTV after an address in New Delhi. “I think as a friend, India should also decide is this a country that they want to continue doing business with.”

U.S. President Donald Trump withdrew the United States from the Iran nuclear deal last month, re-imposing sanctions that had been suspended in return for curbs on Tehran’s nuclear program.

U.S. officials said Washington would be asking major Iranian customers to reduce their oil imports to zero, and warned no exemptions would be made when the sanctions were enforced. Before the 2015 nuclear deal between Iran and six major powers, various buyers of Iranian oil including India had waivers or exemptions to U.S. sanctions.

India’s foreign ministry said Thursday however that the Islamic republic was a “very traditional partner” that enjoyed “historical, civilizational linkages” to India. “She has her views, and ours views on Iran are very clear,” said ministry spokesman Raveesh Kumar of Haley, whose two-day visit to India also included visits to holy sites in the Indian capital. “We will take all necessary steps, including engagement with relevant stakeholders to ensure our energy security.”

Haley’s visit coincided with revelations that a long-anticipated meeting between U.S. and Indian defense and foreign ministers, known as a 2+2, had been delayed for a second time. The U.N. ambassador played down rumors of a rift, saying the meeting would be rescheduled “very soon” and was “an important sign of how much our security and defense cooperation has grown in recent years.”

Washington has put new emphasis on its military ties to New Delhi and its regional role as a counter to China’s rise. But it could still fall foul of U.S. sanctions imposed last August threatening sanctions on any country doing business with Russia’s defense and intelligence sectors.

India, the world’s top defense importer, had been in talks with Russia to buy missile systems when the sanctions were announced and New Delhi has said the embargo would not affect ties to Moscow. Haley said on Thursday that “anybody, any country, that does business with Russia… there are sanctions.”