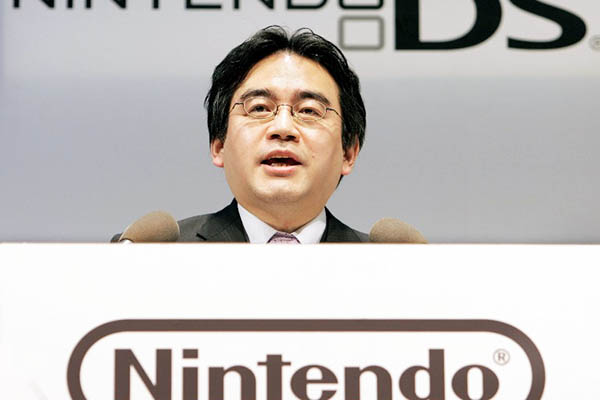 Nintendo’s chief executive has died of cancer at the age of 55, it said Monday, in an upheaval for the Japanese videogame giant just months after abandoning a consoles-only policy and launching a push into the booming smartphone games market.

The Kyoto-based firm said Satoru Iwata passed away on Saturday, with analysts warning that his sudden death could dent a turnaround plan at the maker of the iconic Super Mario, Donkey Kong and Pokemon franchises.

A leading figure in the videogame industry, Iwata oversaw the success of Nintendo’s Wii games console and a surge in revenue before smartphone games started eating away at its success, forcing the strategy re-think. A visibly thinner Iwata announced last year that he was sick and did not attend the firm’s shareholder meeting in June 2014, although the severity of his illness was unclear at the time. He returned to work over the following months, and continued to be the public face of the company, announcing financial results in May.

“Recently, as the result of… detailed examination, a growth was found in my bile duct,” he said in a statement at the time. “In my case, luckily, it was detected very early and I had no symptoms. I was counseled that removal at an early stage would be the desirable medical option. Therefore I had surgery last week, and I came through it well, as predicted.”

Bile duct cancer is a relatively rare, but aggressive illness that usually affects people over the age of 65.

Iwata started off as a games developer before taking over the top post at Nintendo in 2002. Japan’s leading Nikkei business daily on Monday credited Iwata for tapping into a broader gaming demographic with the handheld DS system and Wii console, although the Wii U has not enjoyed its predecessor’s record-breaking sales.

Widely respected in the industry, Iwata did face criticism for his stubborn refusal to license some of the company’s well-known brands for use on mobile applications.

“I don’t see that there is anyone who can run the company like Iwata. Under his leadership, it was making small but steady steps forward,” said Satoshi Tanaka, an analyst at Daiwa Securities Capital Markets. “I am afraid the company might lose balance without Iwata.”

Nintendo said directors Genyo Takeda and Shigeru Miyamoto would step in to run the firm. “What a terribly sad day,” Peter Moore, chief operating officer at U.S.-based videogames developer Electronic Arts, said on Twitter. “Iwata-San was such a gentleman. Huge loss for the industry.”

Last year, Iwata said he would temporarily slash his salary in half to atone for the downturn at a company that started as a games card maker in the 19th century before morphing into a global videogame giant in the 1980s. But more recently Nintendo faced stiff competition from Sony and Microsoft in console sales, as the trio battled the trend toward cheap—or sometimes free—downloadable games for smartphones and other mobile devices.

Nintendo’s chief had argued that venturing into the overpopulated world of smartphones and tablets risked hollowing out the core business and cannibalizing the hard-fought value of their game creations. Iwata later acknowledged Nintendo had little choice but to move into new areas.

“The world is changing, so any company that is not coping with the change will fall into decline,” he said.

Nintendo in March unveiled plans to buy a stake in Tokyo-based mobile gaming company DeNA as part of a deal to develop smartphone games based on Nintendo’s host of popular characters. The changes came as Nintendo eked out a profit in its last fiscal year but warned its bottom line would shrink in the current business year.