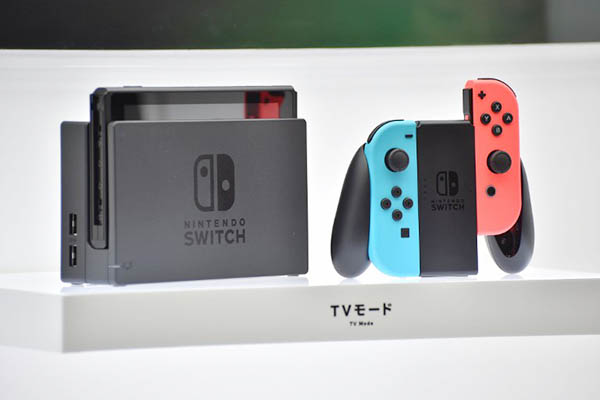 Priced at $299, the latest game console will hit shelves on March 3.

Nintendo on Friday unveiled its new Switch game console, which works both at home and on-the-go, as it looks to offset disappointing Wii U sales and go head to head with rival Sony’s hugely popular PlayStation 4.

The hybrid device comes as Nintendo dips its toe into the mobile gaming market after scoring a big win for its brand in the summer with the success of Pokemon Go.

The company said its new console was full of Nintendo’s “entertainment DNA” with elements of earlier devices including the 3DS handheld device and motion-senor Wii. Before the event, Daiwa Securities described the unveiling as “a key turning point for Nintendo’s earnings and share price.”

But Switch got off to an inauspicious start in October when a sneak peak at the console left gamers and analysts underwhelmed and with many unanswered questions. Nintendo’s Tokyo-listed stock dived after it released a three-minute video about the product on its YouTube channel.

A similar New York media event will follow later in the day.

Switch has a removable screen that lets players dock it at home and also use it on the go like a tablet computer with detachable controllers on both sides. It uses cartridges rather than discs.

Switch will be crucial for Nintendo, which needs a hit product to offset the flagging fortunes of the Wii U and 3DS, as rival Sony racks up huge sales of the PS4—it has sold more than 50 million units globally since its debut in late 2013.

In November, Sony started selling the $400 PS4 Pro, which promises even sharper graphics than earlier versions.

After struggling to fix its weak finances, Nintendo abandoned a long-held consoles-only policy and decided to enter the smartphone game market. Last year, the Super Mario and Donkey Kong maker released “Miitomo”—a free-to-play and interactive game—as it tries to compete in an industry that has increasingly gone online.

It scored another hit with the Pokemon Go app released in July, but the impact on Nintendo’s profits will be limited.

The company is the creator of the Pokemon franchise but does not own the license for the game, which was developed and distributed by U.S.-based Niantic, a spinoff of Google.

Last month, Nintendo released the Super Mario Run game for iPhones, which topped download charts and drew more than 40 million downloads globally in the first four days after its release, according to the company. But analysts warned its popularity could be hampered by a relatively high $10 price tag for access to the full game, since many online offerings are free.