Home Latest News No Concessions for the Corrupt: Imran Khan

No Concessions for the Corrupt: Imran Khan 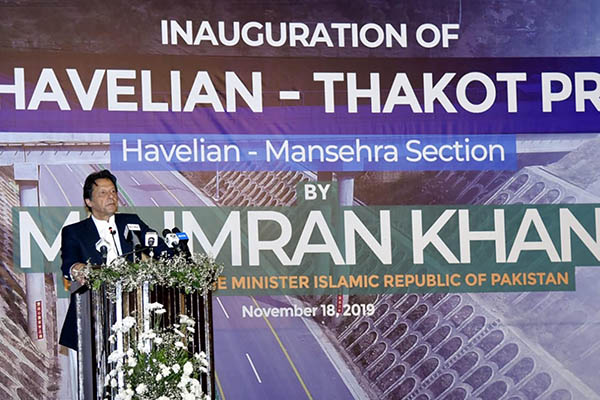 There will be no concessions granted to politicians facing corruption charges, said Prime Minister Imran Khan on Monday, as that would be a massive “betrayal” to the people of Pakistan.

Addressing the inauguration of the Havelian-Mansehra section of the Havelian-Thakot motorway project, Khan claimed he would be facing no resistance from the opposition if he granted them deals forgiving their past actions. “I have a choice to get four years of comfort in return for turning a blind eye to corruption cases… I prefer a tough fight instead,” he said, adding that his 22-year-long struggle from the cricket ground to the premiership had “trained” him to combat difficult situations with courage and resilience.

Referring to the ongoing Azadi March anti-government movement that spent two weeks camped out in the federal capital before expanding nationwide, the prime minister accused the ‘Circus on Container’ of having a sole agenda of pressuring the government to withdraw all corruption cases. He claimed the inflation and economic pressures that the protesters were rallying against had been brought about by previous administrations and his regime was trying to fix them.

Khan said he had challenged the opposition leaders to spent a month on the container and he would fulfill all their demands. “We spent 126 days on a container. A few of my cabinet members were worried, but I told them not to fret, as I know what is container and dharna,” he added.

The prime minister accused Jamiat Ulema-e-Islam (JUIF) chief Maulana Fazlur Rehman of exploiting madrassa students by using the ‘religion card’ in his protests. “The way these kids have been exploited in this dharna is deplorable,” he said, adding a man who could change his loyalties for the sake of seat in government had no right to lecture anyone on religion.

The cricketer-turned-prime minister said the federal cabinet had taken a decision on humanitarian grounds, despite opposition by many lawmakers, to allow former prime minister Nawaz Sharif to travel abroad for medical treatment. He said the government accepted the court’s decision to allow Nawaz to leave without providing any indemnity bond, as had been demanded by Khan’s cabinet, but questioned why similar justice was not provided to the hundreds of prisoners who had died in jails during the last decade.

Khan said Pakistan could only emerge as a great nation if it accepted justice and humanity as its core principles in line with the medieval state of Madina. An effective justice system, he said, made people feel independent while discriminatory laws hurt nations for generations. The prime minister urged Chief Justice of Pakistan Asif Saeed Khosa to make all-out efforts to revive public trust in the judicial system, adding the government would offer its full support.

The prime minister said his first year in office had been “tough,” but said improving conditions would now allow the government to focus on health and education. He said the government had decided to allow duty-free import of medical equipment to encourage the construction of new hospitals. He said the government was also working on foreclosure laws to arrange housing loans for the poor that would boost the housing sector.

Khan hailed the Havelian-Mansehra Motorway project as a component of the China-Pakistan Economic Corridor, which he said would benefit both Pakistan and China. He said CPEC’s scope had been expanded from just a few roads and power projects to agriculture and skill training to enhance agricultural yield and create job opportunities.

National Assembly Speaker Asad Qaiser, Minister for Communications Murad Saeed, and Chief Minister of Khyber-Pakhtunkhwa Mahmood Khan also attended the ceremony alongside senior officers of the government and Chinese companies. The four-lane controlled access motorway will serve as the main route the commercial traffic between China and Pakistan, and would reduce travel time between Islamabad and Mansehra by around 2.5 hours.

Of course dishonesty should be punished. However, accusations motivated by party political or by dishonest reasons are also far too easily made.
These should be checked by punitive libel & defamation laws to prevent extortion & to punish those who slander & lie without credible evidence. Such liars must never be given protection by their office or uniform.