Home Lightbox No Country for Christians

No Country for Christians 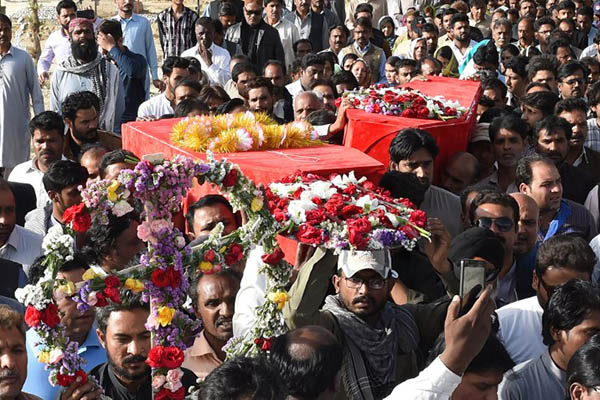 On April 15, militants belonging to the Islamic State group killed in a drive-by shooting two Christians coming out of church after Sunday services in a Christian-majority neighborhood of Quetta. Every time members of the minority go to church, they know they risk being killed. Earlier in the month, four Christians of a family were killed in the same manner. In December 2017, nine were killed and 30 injured in a suicide attack on the Bethel Memorial Methodist Church in Quetta’s Zarghun Road. In 2013, the diocese of the All Saints Church in Peshawar suffered a Christian massacre that resulted in 54 children orphaned, 16 widows, and seven widowers.

Even beyond these militant assaults, Pakistan’s state also targets them through its infamous blasphemy law, forcing the community to try and flee the country for safety. Those left behind are ghettoized for the sake of security, which makes it easier to identify and kill them. When it comes to blasphemy the state participates in this bloodbath; but in other cases domestic and foreign terrorist organizations that Pakistan can’t control proudly announce their Islamic duty of exterminating a community that doesn’t pay “jizya” (protection tax).

Under Article 20 of the Constitution of Pakistan, there is freedom to profess religion and to manage religious institutions; under Article 22, there are safeguards for education with respect to religious freedom; under Article 25, there is equality of citizenship; and under Article 36, there is protection for all minorities. But these rights and values, enshrined in the Constitution, have been undermined by a series of legislations related to the affirmation of the state’s ideological credentials. In 2013, Dr. Ruth Pfau, a symbol of Christian selflessness and devotion to Pakistan’s leprosy patients, died at the age of 87 at a Karachi hospital. She had been the recipient of Pakistan’s top civilian honors, the Hilal-e-Imtiaz and the Hilal-e-Pakistan, but her service to the country was not enough to stop the massacre of Christians.