No Country for New Mothers 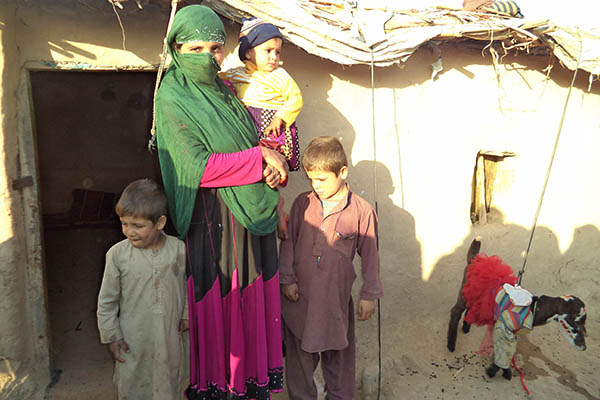 Sakina Bibi, pregnant with her fourth child, with two of her children at an Afghan refugee settlement in Islamabad. Photograph by Mahwish Qayyum

Neglected healthcare facilities for refugees in Pakistan is contributing to a rise in maternal, neonatal deaths

Pakistan has one of the highest maternal mortality ratios in South Asia, primarily due to a lack of adequate healthcare for new mothers. This healthcare shortage is even more pronounced among marginalized Afghan refugees—many of whom have lived in Pakistan now for three decades—relying on unskilled midwives, leading to pregnancy complications and even deaths of mothers and newborns.

“I have four children and all of them were born at home in the camp with traditional midwives because there is no maternity center here,” Nagina Sayed, 34, told Newsweek from an informal settlement in federal capital Islamabad in Sector I-12 where 505 registered Afghan families comprising 3,424 individuals, including 2,136 children, live in an area spread over 472,300 square feet. Rocking a 20-day-old baby to sleep in a wooden cradle, she says the local hospital has no maternity facilities. “Without any maternity services, refugee women have no option but to give birth with the help of traditional birth attendants or elder family members.”

“Being a mother is the most beautiful emotion in the world,” says Sayed, but “many mothers and infants lose their lives” in these camps. “Two years back, I lost one of my children because of the negligence of the unskilled midwife soon after delivery,” she recalls, adding that the trauma had left her emotionally devastated. “Had my child been born in hospital with the help of experienced and skilled doctors, I am certain he would be alive,” she notes ruefully as she cradles her newborn. “This baby was also born with the aid of a midwife. We’re both fine, but I contracted a uterine infection shortly after childbirth,” she says, highlighting how even successful childbirths can carry risks that midwives lack the training or skill to overcome.

Sayed’s tragic experiences are reflected in data compiled by various organizations monitoring maternal healthcare and infant mortality in Pakistan. UNICEF, in its “Every Child Alive” report from 2018, found that Pakistan has one of the highest newborn mortality rates in the world. Of every 1,000 babies born in Pakistan, it notes, 46—or nearly 1 in 20—die before the end of their first month. Over 80 percent of these deaths, the report adds, can be prevented if midwives are provided with necessary training. Similarly, a Save the Children report from 2014, “Ending Newborn Deaths,” notes Pakistan has one of the world’s highest stillbirth rates. This is largely a result, it says, of infants not receiving timely care from skilled health workers.

Another resident of the Islamabad Sector I-12 camp, Sakina Bibi, is currently seven months pregnant with her fourth child. Her third pregnancy, she says, was very difficult and almost resulted in her death. “I ran into complications and nearly died because of excessive bleeding. Fortunately, my husband rushed me to a government hospital and I survived,” she says, adding, “Despite this, I have no option but to hire the services of traditional midwife and deliver my current pregnancy at home.” According to Women on Waves—a Dutch non-governmental organization—90% of women who deliver at home in Pakistan utilize unskilled birth attendants, with 80% of maternal deaths occurring due to home births. Only 1 in 20 women reach emergency obstetric care. The United Nations Population Fund (UNFPA)’s statistics are far more damning, claiming skilled health personnel attend only 55 percent of births across Pakistan.

“There is a hospital in the camp which charges Rs. 300 for ultrasound but it does not have any childbirth facility,” Bibi tells Newsweek. “We can’t afford the charges of private hospitals and gynecologists’ fees so we have to hire midwives,” she says. Just a few months ago, she says, a woman died during childbirth because she only had a midwife to rely on for delivery.

According to the World Health Organization (WHO), every day approximately 830 women die globally from preventable causes related to pregnancy and childbirth. It says almost all maternal deaths (99%) occur in developing countries, with nearly a third occurring in South Asia alone. Save the Children noted in a 2015 report that Pakistan’s ranking in the Mother Mortality Ratio had slopped from 147 to 149, with one in every 170 women at risk of maternal death. 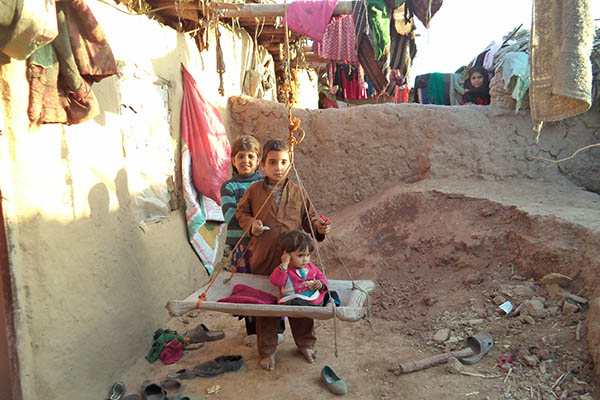 Children of Afghan refugees at a settlement in Islamabad. Photograph by Mahwish Qayyum

Dr. Sadaqat Jabeen, Head of Department of the Gynecological Unit at Lady Reading Hospital in Peshawar, says women in Pakistan often deliver children at home due to, among various factors, socioeconomic conditions, family customs, lack of health facilities. Citing the Pakistan Demographic and Health Survey 2017-18, she says 19 percent of urban women and 41 percent of rural give birth at home. Of these, unskilled health providers tend to 16 percent of urban residents and 37 percent of rural.

Jabeen likens the shortage of trained birth attendants to a national tragedy. Unskilled birth attendants, she says, often fail to practice basic hygiene, leading to complications—such as obstetric fistula, chronic pelvic diseases, maternal morbidity and even mortality—that can easily be prevented in well-appointed hospitals. This is especially worrisome in Pakistan, where Population Council estimates have found that around 15 percent—or 1.2 million of the nearly 8.6 million women who become pregnant annually—are likely to face obstetric complications and require special care.

A leading cause of infections among new mothers, notes Jabeen, is midwives failing to properly expel placenta from the womb. Postpartum Hemorrhage, she says, is among the major causes of death of new mothers, with most cases linked to retained placenta and lack of sanitation and hygiene. The only solution, say experts and reports, is dedicated maternal healthcare facilities that specifically cater to deliver on much-needed services for newborns and their mothers.

Qaiser Khan Afridi, spokesman for UNHCR Pakistan, admitted to Newsweek the settlement in Islamabad where Nagina and Sakina live has no maternity center. Noting that the settlement did not have a formal ‘refugee camp’ status, he said a basic health unit had been established in 2010 to provide medicines and care but had suspended operations a year later due to lack of funding. It was re-established in April 2013 with a focus on reproductive health and mothers and child health program, he added. These are promising steps. However, for Afghan mothers in this ‘settlement,’ they offer slim hope of safety—much less survival—for them or their children.

Pakistan has always prided itself on being a host nation to millions of refugees, for taking in the disenfranchised who fled the Soviet invasion of Afghanistan. In ensuring better maternal healthcare facilities across Pakistan—in line with the U.N.’s Millennium Development Goals—Islamabad not only protects and strengthens its own citizens, but also lives up its claim as the world’s largest host of refugees. After all, children are a nation’s greatest asset and its most precious treasure; it is high time Pakistan invests in, and protects, this vital resource.

Qayyum is a freelance journalist based in Peshawar. She tweets @mahwishqayyum