Home Latest News No Hope of Survivors in Pakistan Avalanche

No Hope of Survivors in Pakistan Avalanche 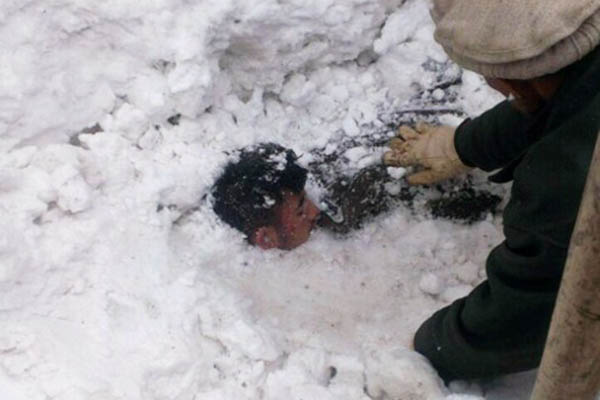 Chances of survival were fading for seven people feared buried under an avalanche three days ago in a remote northern Pakistani village, authorities said Monday.

The disaster struck on Saturday afternoon near the village of Susom, some 40 kilometers north of Chitral in Khyber-Pakhtunkhwa province. A massive avalanche fell on a group of schoolchildren returning home after exams. Two bodies—those of a school boy and a local man—were pulled from the snow on Sunday, while rescuers have not been able to find seven pupils who remain missing.

“A pupil and a passerby’s bodies have been found so far and we have now no hope of finding any survivor among the seven people who are still buried under the avalanche,” said local government official Mazhar Ali Shah.

Officials on Sunday feared that up to 11 people were hit by the landslide, but later changed the figure to nine.

An AFP reporter who reached the spot said that local people were digging in the snow with spades and shovels to find the victims. He said that snow was three-feet deep in the area and people had to walk for hours to reach the site of the avalanche and that no machinery could get there to help dig for survivors.

Local police official Mohammad Zafar said pupils were returning to their village Karimabad after finishing high school exams when the incident took place on Saturday. Nobody was aware of the accident till the evening when worried parents started searching for children who had not returned home, Zafar said.

Heavy rains have killed at least 121 people, injured 124 and damaged 852 houses since March 9 across Pakistan, according to the National Disaster Management Authority. It said landslides and collapsed roofs caused most of the fatalities.