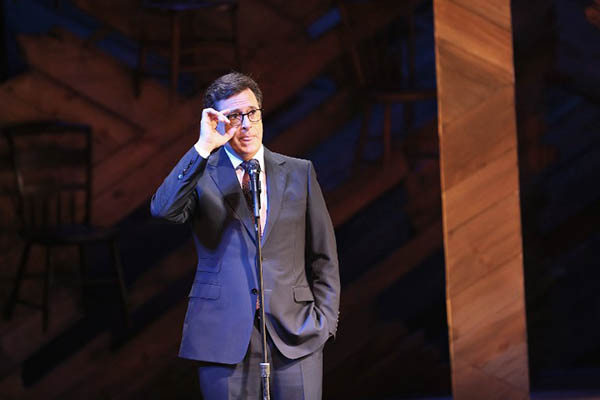 U.S. presidential elections tend to be a gift for comedians—they offer a seemingly endless stream of material, for months on end. America’s kings of late night regularly pepper their opening monologues with swipes at the candidates, and Saturday Night Live becomes must-see TV.

Tina Fey’s impersonation of Sarah Palin was nothing short of career defining and Alec Baldwin’s take on Donald Trump earned praise—and quite a few guffaws. But after Trump’s shock win this week over Hillary Clinton, even the late-night hosts are somber and the laughs are few and far between.

During Trump’s run, the jokes practically wrote themselves—at times, the bombastic Republican almost seemed a caricature of himself, embracing his own inconsistencies and tics. On Tuesday night, the reality came crashing home.

Stephen Colbert, who built his career on satirizing conservatives during the George W. Bush years and took the place of legend David Letterman at CBS, learned on-air that Trump would likely be the 45th president of the United States. “I can’t put a happy face on that, and that’s my job,” Colbert admitted bluntly during his special live Election Night broadcast.

The next day, Colbert told viewers: “I’m not sure what to believe about anything anymore. This is what it feels like when America is made great again. I was really hoping it would feel better, because this sucks.”

Chelsea Handler—usually known for her foul-mouthed sex talk—broke down in tears during her Netflix talk show that aired Wednesday night as she discussed Clinton’s loss. “Like a lot of people in this country, I’m sad, I’m disappointed and I’m confused,” the 41-year-old said. “But if Hillary can make it through a concession speech, then I can make it through a stupid television show.”

In his ultimately successful bid for president, Trump hurled near constant criticism at the mainstream media—and grew increasingly thin-skinned about the jokes made at his expense.

When Jimmy Fallon asked to muss Trump’s legendary shock of blond hair earlier in the campaign, he obliged. But when Baldwin started lampooning him weekly on Saturday Night Live, Trump got fed up. “Watched Saturday Night Live hit job on me,” he wrote on Twitter. “Time to retire the boring and unfunny show. Alec Baldwin portrayal stinks. Media rigging election!”

It was indeed true that most major networks—and the late-night hosts on those networks—expected veteran Democrat Clinton to win. Wednesday was something of a rude awakening.

That night, Trevor Noah, a biracial South African comedian who hosts The Daily Show on Comedy Central, wasted few words on humor. “I genuinely cannot believe that this happened,” he said. “Even the Trumps can’t believe this happened.”

“I know today was a crazy day,” he continued in a more somber voice. “Some people are sad. Some people are scared and nervous. Some people are happy. This morning I was walking around New York City and this guy came up to me and he said, ‘Hey, we’re going to need some laughs tonight.’”

Fallon vowed to muster his comedic strength and try do just that. “My job is to come out here every night and try to make you laugh; take your mind off things for a while.”

Over at Saturday Night Live, Baldwin expected his cameo appearances on the late night variety sketch show would be a temporary gig, and that his run would end following a Clinton win. Now, Baldwin could end up with a lot more work.