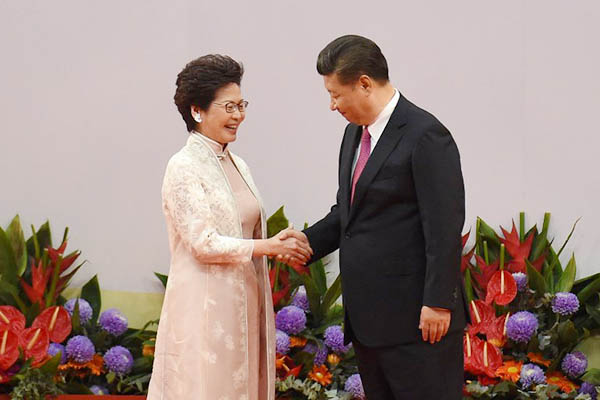 China says Hong Kong handover agreement is part of history and U.K. no longer has any claim over city

In the midst of celebrations marking 20 years since Britain returned Hong Kong to China, Beijing declared that the document that initiated the handover “is no longer relevant.”

The remarks on Friday came a day after U.K. Foreign Minister Boris Johnson stressed Britain’s commitment to the historic Sino-Britain Joint Declaration, which gave Hong Kong rights unseen on the mainland through a “one country, two systems” agreement.

The U.S. State Department also said Thursday that the U.S. “remains concerned about any infringement of civil liberties in Hong Kong,” and expressed support for the “further development of Hong Kong’s democratic systems.” In response to the U.S. and U.K. statements, Chinese foreign ministry spokesman Lu Kang detailed Hong Kong’s “comprehensive achievements with the support of the central government and mainland.”

Citing Hong Kong’s low unemployment rate and free economy during a regular press briefing on Friday, Lu said: “Now Hong Kong has returned to China for almost two decades and this communiqué is a historical document.”

“It’s no longer relevant,” Lu said, “and the U.K. has no sovereignty, governing power or the right to supervision over Hong Kong.”

Chinese President Xi Jinping, who arrived in Hong Kong on Thursday to lead handover anniversary celebrations, has said that he wanted to ensure the continuation of the “one country, two systems” set-up.

Xi’s three-day visit comes three years after “Umbrella Movement” protesters crippled the city for months as they camped out on thoroughfares, calling for reforms and the protection of Hong Kong’s unique status. A huge security operation has been put in place for the Chinese president’s visit and the anniversary celebrations, with thousands of police deployed to keep demonstrators away.

The Sino-British declaration said Hong Kong would be a “Special Administrative Region” of China, and would retain its freedoms and way of life for 50 years after the handover date on July 1, 1997. As part of the deal, Hong Kong was guaranteed rights including freedom of speech and an independent judiciary, but there are concerns those liberties are disappearing as Beijing becomes ever more assertive.

Young activists calling for self-determination or independence have emerged as a result. “I’ve no doubt that Hong Kong’s future success will depend on the rights and freedoms protected by that treaty,” Johnson said.