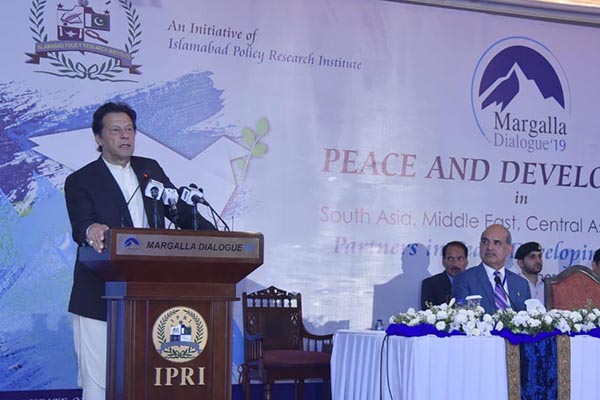 Prime Minister Imran Khan on Thursday said Pakistan would not join any future military alliance or participate in another country’s war, adding that Islamabad would prefer to play the role of a “bridge-builder.”

Addressing the concluding session of the two-day Margalla Dialogue 2019 in Islamabad, Khan said the time had come to stop fighting other people’s wars. “Pakistan has learnt its lessons from foreign policies of the last four decades and we will not fight someone else’s war,” he said.

According to state-run APP, the prime minister reiterated his stance of Pakistan having suffered immensely over it role as a frontline state during both the 1980s Afghan jihad and the American war on terror following the 9/11 terror attacks. He said that even though there were economic advantages to these conflicts, with foreign funding flowing into Pakistan, the eventual cost to the fabric of Pakistani society was not worth it.

“We have yet to fully measure the gravity of the negative impact that these wars inflicted upon Pakistan and our society,” he said. “We have now decided to play the role of bridge-builders and reconciliators,” he added.

The prime minister said Pakistan was dedicated to ensuring peace in its immediate neighborhood, including promoting the Afghan peace process, and had also played a reconciliatory role to help ties between Saudi Arabia and Iran.

Referring to the United States and China, which are often at loggerheads over trade and foreign policy, Khan said Beijing’s focus on infrastructure development held a superior standing compared to Washington, which spent trillions of dollars on wars against other countries.

Khan said Pakistan was on a path to progress by taking corrective measures, including improving ease-of-doing business, and promoting tourism and sports in the country.

The Margalla Dialogue 2019, organized by the Islamabad Policy Research Institute, convened on the topic of ‘Peace and Development in South Asia, Middle East and Central Asia.’ It included security and political experts from 13 countries to discuss the challenges currently facing the South Asian region.

Spread over four sessions, the talks centered on pressing contemporary issues, including the Kashmir dispute, the conflict in Afghanistan, the persistent crisis in the Middle East, Pakistan’s role in geopolitics, cyber-security, climate change and water security.