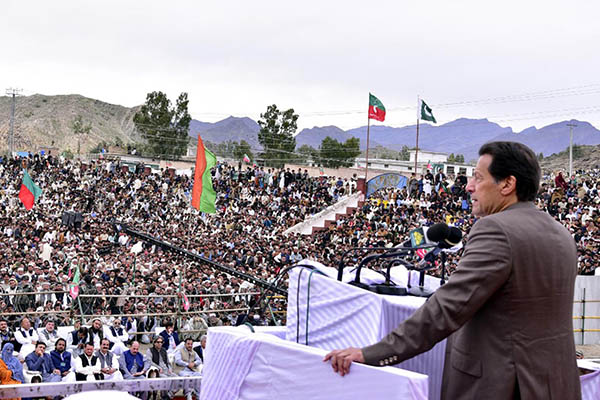 In speech at Mohmand, Pakistan’s prime minister claims ‘difficult time is over’ and rampant inflation will soon come down

The Pakistan Tehreek-e-Insaf-led government will not announce any new increases to gas and electricity tariffs, and efforts are underway to reduce it, Prime Minister Imran Khan announced on Monday.

Addressing a public gathering in Mohmand after distributing Kafalat Cards under the anti-poverty Ehsaas Program, Khan said he had decided to put a halt on tariff increases as “people can’t afford anymore.” As is habit for the prime minister, he accused the previous government—which has now been out of power for almost two years—for the price surge, claiming it had agreed to purchase utilities at exorbitant rates, leaving the incumbent regime helpless to curtail the circular debt plaguing the country’s power sector.

The prime minister said his government would soon initiate dialogue with power producers to encourage them to lower their prices and shut down plants that are producing costly electricity, as the government no longer wishes to pass on the burden to people and industries. He, once again, said the 15-year gas contract signed by the previous government had resulted in Pakistan getting gas supply at higher rates than the rest of the world.

According to Khan, the PTI-led government has started to “fix” the prevailing system to provide job opportunities to the people and bring down inflation. “Don’t worry, difficult time is over,” he reiterated, claiming the government had now reined in inflation and prices of commodities would soon come down.

Prior to discussing the economy, the prime minister launched his address by condemning the ongoing atrocities against minorities in the Indian capital New Delhi and India-held Jammu and Kashmir. He said all of Pakistan was united in solidarity with the eight million Kashmiri Muslims who had been living under a virtual lockdown since last August, adding that he had long been warning the world that if Indian P.M. Narendra Modi’s Hindu supremacist agenda were not brought under control, it would lead to the kind of bloodshed that was now being seen in New Delhi.

Khan warned that the extremist ideology espoused by the Bharatiya Janata Party would not stop at the harassment of Muslims, but would eventually also target Christians, Sikhs, Dalits, and other religious minorities.

The prime minister said the anti-poverty Kafalat Cards being launched in Mohmand reflected the principles of the Riyasat-e-Madina, which had worked to protect the impoverished, including their education, health and employment.

Congratulating the chief minister and governor of Khyber-Pakhtunkhwa province over the merger of the tribal areas into the province, he said elected representatives would highlight their issues at Parliament.

Khan also told the audience that his government had picked Mohmand to develop massive olive orchards to reduce the import bill for olive oil, besides producing quality product. A marble industrial estate would also be developed in the region, he claimed, to create job.

To calls for the opening of the Afghan border, the prime minister said the restoration of peace in Afghanistan would greatly benefit Pakistan, especially residents of the tribal area vis-à-vis the creation of employment and economic activity.

In his address, the chief minister said the government would fulfill all the commitment it had made to the residents of the tribal areas, including the absorption of around 30,000 Levies personnel into the Khyber-Pakhtunkhwa police and the enforcement of a uniform judicial system.

Crediting P.M. Khan for allocating Rs. 83 billion for the uplift of the tribal areas, he promised that the government would introduce multiple development schemes, including water supply and road infrastructure, to the region. He said a mega sports complex would be constructed for Mohmand at a cost of Rs. 750 million, and a grant of Rs. 2 million would be provided to the Mohmand Press Club.

Nishtar, meanwhile, said the Kafalat Cards scheme would be launched in all four districts of Mohmand first and then be expanded to the rest of the province. She said registration centers had been established to include the maximum number of deserving people in the Ehsaas program.