No Muslim Should Be U.S. President: Ben Carson 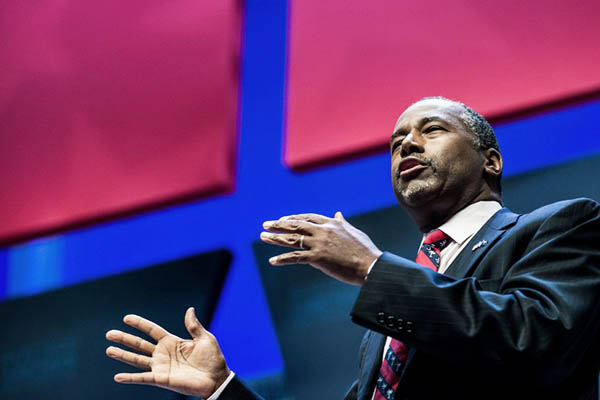 Republican presidential hopeful Ben Carson said Sunday no Muslim should be president of the United States, adding a new twist to a controversy roiling the party’s White House nominating race.

In an interview with NBC’s Meet the Press, Carson, a retired brain surgeon who often refers to his own deep Christian faith, was asked whether a president’s religion should matter. “I guess it depends on what that faith is. If it’s inconsistent with the values and principles of America, then of course it should matter. But if it fits within the realm of America and consistent with the constitution, no problem,” he said.

Asked whether he believes Islam is consistent with the U.S. constitution, he responded: “No, I don’t. I do not.”

“I would not advocate that we put a Muslim in charge of this nation. I absolutely would not agree with that,” he added.

The Council on Islamic-American Relations said Carson’s comments make him unfit to be president. “This disqualifies him from being a president,” CAIR director Nihad Awad said. “My advice to GOP presidential candidates: Read the U.S. constitution if you haven’t yet! It keeps America great.”

A Carson campaign official later suggested Carson’s comments were being overstated and that Carson would likely reach out to the Muslim community, NBC reported. “He did not say that a Muslim should be prevented from running, or barred from running in any way,” Carson campaign spokesman Doug Watts was quoted as saying by NBC. “He [Carson] just doesn’t believe the American people are ready for that.”

The issue abruptly surfaced in recent days when Republican frontrunner Donald Trump let pass unchallenged a questioner’s assertion that U.S. President Barack Obama was a Muslim. Trump later said he was not “morally obligated” to defend Obama against the man’s unfounded claim, but his handling of the incident drew fire from Democratic frontrunner Hillary Clinton, the White House and some Republican rivals of the billionaire real estate mogul.

Carson, who slipped to third among Republican presidential contenders in opinion polls Sunday after running second to Trump for weeks, said he believed Obama was born in the United States and is a Christian.

His remarks predictably sparked ire from Democrats. Senator Bernie Sanders, a presidential hopeful, said on the campaign trail in New Hampshire that he was “disappointed” in Carson, who is black. “It took us too long to overcome the prejudice against electing a Catholic or an African-American president. People should be elected to office based on their ideas, not their religion or the color of their skin,” Sanders said.

Democratic National Committee chair Debbie Wasserman Schultz, a congresswoman from Florida, said it was “hard to understand what’s so difficult about supporting an American citizen’s right to run for president.”

“Of course a Muslim, or any other American citizen, can run for president, end of story. To think otherwise is not only harmful to our political process, but it elevates and validates discrimination in this country,” she said, calling for an apology.