Home Latest News No Place for Women at ‘Azadi March’

No Place for Women at ‘Azadi March’ 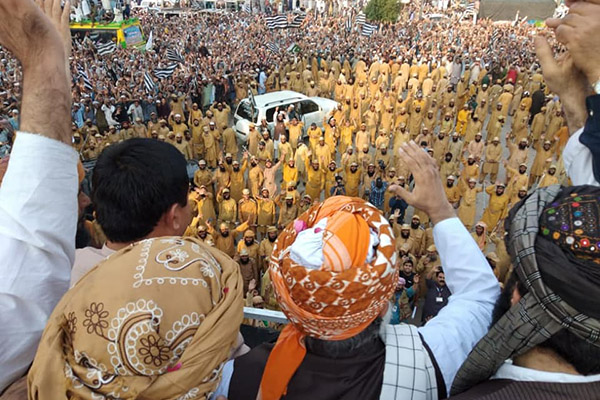 Scenes from the ‘Azadi March,’ which started four days ago in Karachi before reaching Islamabad last night, are proving notable for a glaring omission: the lack of any women participating in or addressing the opposition rally.

“One thing is clear from what has been seen of the opposition march so far…. Their vision of Pakistan is one where women have no place in the public space,” said Pakistan Tehreek-e-Insaf leader and former finance minister Asad Umar on Twitter. Others on social media echoed his comments, with one user saying: “Is the March to free themselves of women or this government?”

Amid rising anger over the lack of women participating in the march, some female journalists have alleged that they have been turned away from the venue and told they would not be allowed to cover the march, as it is for men only.

Sensing shifting public attitudes, Senator Maulana Abdul Ghafoor Haideri of the Jamiat Ulema-e-Islam (JUIF) took to the stage and announced to all marchers that women journalists should not be stopped from covering the event. All women should be treated with respect, he said, adding that there was no ban on entry of women at the rally.

JUIF lawmaker Naeema Kishwar told The News daily that the party had barred women from attending the march. She said that the same information had been conveyed to the other opposition parties and they had been told not to invite women to it.

A spokeswoman for the party later told Geo News that they did not how long the dharna might last and it did not make sense for women to join at this juncture. However, she added, “if the situation reaches a [critical] point, no one should think we will not join the men at the venue.”

The JUIF has traditionally held a very conservative attitude toward women, and has repeatedly sided against legislation for women’s rights. In 2016, party chief Maulana Fazlur Rehman had slammed the Punjab Assembly for passing a women’s protection bill, declaring it ‘un-Islamic.’