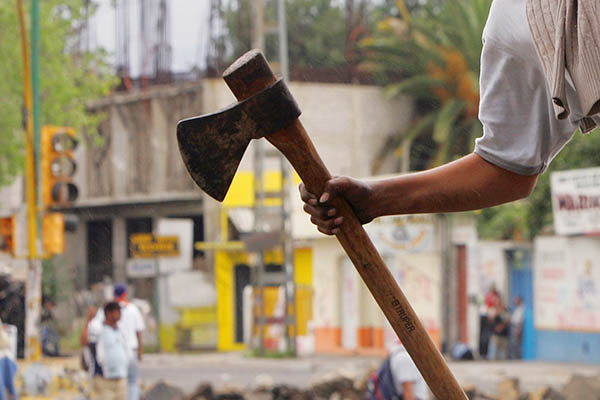 Indian man who killed his daughter and her boyfriend to protect his family’s honor says he cleaned ‘social wrong.’

The Indian father who killed his daughter and beheaded her boyfriend after they eloped has declared he feels no remorse over the “honor killings,” media reports said Friday.

The father and other relatives of the 20-year-old woman beat the young couple to death on Wednesday “to protect the family and village honor,” police said.

After killing the man, 22, using sticks, the attackers, who all belong to India’s northern state of Haryana, beheaded him. They also tried to burn the woman’s body but were stopped by police.

The woman’s family disapproved of the three-year relationship because the couple belonged to the same caste and were “considered brother and sister,” police said.

The father, who has since been taken into custody, showed no signs of remorse over the brutal killings as he spoke to local reporters in Haryana’s Rohtak district. The woman’s mother and uncle have also been arrested and police said they were searching for a brother.

“I have done nothing wrong. I have cleaned up a social wrong,” the father, Billu Pehlwan, a dog breeder by profession, was quoted as saying by the Times of India and other newspapers. The NDTV network showed him saying: “I would do it again. I have no regrets.”

India has for centuries seen killings that often target young couples who have relationships which are disapproved of by their families, clans or communities, particularly in traditional rural areas. Close relatives or village elders usually carry out the killings to protect what is seen as the family’s reputation and pride.

The dead woman was studying to be an art teacher while her boyfriend was a student at a local college. They were on their way to the capital New Delhi when they were tracked down and hauled back to their village.

Women’s groups slammed the deaths, saying political leaders must step in to stem the tide of honor killings.

“We need a whole debate on tradition, on honor. This girl was lynched by her own family, the boy was beheaded,” Subhashini Ali, head of the All India Democratic Women’s Association and a communist politician, told NDTV network. “Why are the netas (politicians) staying silent over this gruesome incident?”

There are no official figures on honor killings, but the association says its research shows about 1,000 such cases nationwide a year.

India’s Supreme Court said in 2010 that the death penalty should be given to those found guilty of honor killings, calling the crime a barbaric “slur” on the nation.

Last year, five members of a family were sentenced to death for the torture and “brutal” murder of a young couple from Delhi in another such “honor killing.” Autopsy reports revealed the couple had been tied with ropes, beaten with metal pipes and electrocuted.

Many cases go unreported, with police and local politicians turning a blind eye to what some see as an acceptable form of traditional justice by families seeking to protect what they see as their honor.

Any killing honour or otherwise is wrong ,illegal ,immoral and unislamic .This is like taking law into own hands .In cases of illicit relations or those not approved by the families one must abandon the daughter / son and not indulge in killings .Better way is to get them married and accept their relationship ,if not in a position to accept then abandon them after their marriage .Killings in fact bring dishonor to family ,a long ordeal of court cases , jail term and finally ruining of family and property .Islam does not allow such self punishments .Proper way is to inform the concerned authorities about any wrongdoings in the society .Law of the land is only applicable which will be enforced by the state authorities .

It is beyond heart breaking. What kind of weird thinking makes people do these things. They need wholesale reeducation and serious penalties.