‘No Talks Until Attacks Cease’ 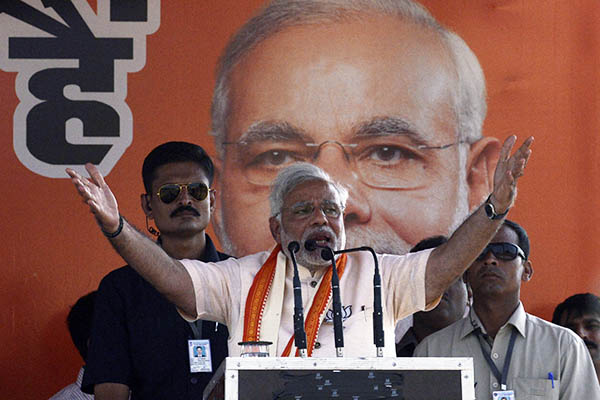 India election frontrunner Narendra Modi says there will be no talks with Pakistan until attacks on India end.

India election frontrunner Narendra Modi pledged Thursday to allow Indian-origin citizens of any foreign country to return if they felt persecuted, opening the door to migrants from Bangladesh and Pakistan. In a wide-ranging interview with the Times Now channel, he also stated that there could be no talks with Pakistan unless attacks on India ceased.

The Hindu nationalist also reiterated that he expected to head the most stable administration since 1984, when the rival Congress party won the last majority in parliament. Asked to elaborate on remarks at the weekend about welcoming back Hindus from overseas, Modi said that India should be a sanctuary, even for those living abroad for “100-150 years.”

“A person living anywhere in this world, whose passport may be of any color, but if his blood is similar to ours, then he is invited,” said Modi. He referred specifically to Hindu minorities in neighboring Bangladesh and Pakistan who face persecution, but also those in Africa, Fiji or the Indonesian island of Sumatra. Asked if his invitation extended to Indian-origin people of all religions, including Muslims, he replied: “That is obvious.”

Modi, prime ministerial candidate for the Bharatiya Janata Party (BJP), is running on a platform of economic revival and clean government after 10 years of rule by the scandal-tainted Congress party. But he remains a divisive figure, tainted by anti-Muslim riots in his home state of Gujarat, which he has run since 2001, and viewed with suspicion by religious minorities because of his past Hindu nationalist rhetoric.

Surveys show the BJP is likely to emerge as the biggest party in parliament when results are announced on May 16, but short of a majority. Modi said that the “BJP is winning with a clear majority and we will be forming the strongest and most stable government since Rajiv Gandhi’s government” in 1984-1989.

Asked about peace talks with Pakistan, with which India has fought three wars since independence in 1947, he said that discussions could not take place “if we are surrounded by the noise of bomb blasts and gunshots.”

The BJP was a vocal critic in opposition of Prime Minister Manmohan Singh’s negotiations with Pakistan even though attacks on Indian targets continued—allegedly with the support of Pakistan’s intelligence services. “To have a reasonable discussion, first the blasts and gunshots have to stop,” Modi said. “There can be no talks till all this comes to an end.”

Modi’s threats against Pakistan reflects the mind set of this staunch Hindu nationalist leader. He is exploiting the sentiments and feelings if the nationalist conservative voters. His poisonous rhetoric would not pay dividends He must tone down his lambasted ego. He should not forget that Pakistan is a nuclear power, and capable of defending any aggression.

Modi is a front runner and has more chances to win by a small margin. He might have to form a coalition government.. He must understand that the peace of the entire region depends on India’s good conduct.He has unbridled tongue, that must be reined in.

He should try to solve the problems in n amicable manner. Threats will not serve anybody’s purpose. I hope , he does not win by greater margin.

I think Narendra Modi is true face of India.