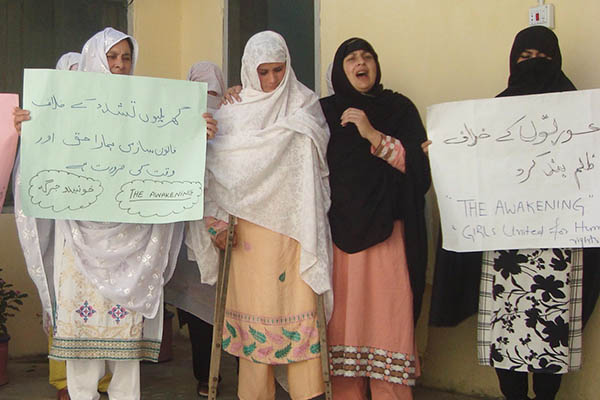 Women in Swat demand the government enact and enforce legislation to stop domestic violence in Pakistan.

Shabnam, a 20-year-old resident of Mangalkot, finds it difficult to move without aid since her leg had to be amputated two-and-a-half months ago after her husband beat her with an axe, leaving her for dead. The inhuman act, prompted by a domestic squabble, has left her and her two children reliant on her family even as her husband’s case is still pending in court.

The disabled woman told Newsweek her family had arranged her marriage to Gohar Ali when she was 13 years old. She said the two had often argued over petty issues but this was the first time he had attacked her with an axe. According to Shabnam, Ali hit her with the axe several times, aiming for her head and her leg. After he was done, she says, he locked the door behind him and left.

Later that night, Ali asked a local guard to check on his wife. “He knocked at the door and asked me to open it,” she says. “I dragged myself to the door and opened it even as both my head and leg continued to bleed,” she said, adding that the guard had taken her to hospital where her leg had to be amputated. Ali was subsequently arrested by local police but has not yet appeared in court. “A case has been registered against him. It is now up to the court to decide [how to punish him],” said an official at the police station.

Earlier this week, dozens of women in Swat protested the attack on Shabnam, claiming she was one of hundreds of women who had suffered amputations in the hometown of Nobel laureate Malala Yousafzai. Carrying placards and chanting slogans against the government, they demanded that action be taken against domestic violence as per law. In 2009, the National Assembly of Pakistan passed the Domestic Violence (Prevention and Protection) Bill, but it was rejected by the Senate and currently faces opposition from the religious right wing over allegedly “anti-Islamic” language.

Organized by Tabassum Adnan, the founder and chairwoman of the non-governmental Khwaindo Jirga (sisters’ Jirga), the protest demanded an end to domestic violence. “It has become tradition to chop off the limbs of women in Swat,” said Adnan. “First they chopped off women’s noses, now they are chopping off legs, but nobody cares,” she said, adding that a domestic violence bill needed to be implemented and enforced to end this practice.

Local police mishandle the first information report, leading to the early release of the majority of attackers, she said, claiming most cops gave the benefit of the doubt to the (mostly) male criminals. “What are the women in Parliament doing there,” she asked, adding, “We don’t want any more domestic violence, period.”

Shabnam’s mother, who was among the protesters, says she is in a state of constant agony since her daughter was injured. “Why did he have to treat my daughter with so much brutality,” she asked. “He should have just returned my daughter to me,” she said. “I want him [Ali] to face the same fate he has forced upon my daughter.”

“We request the government to help us,” said her brother, Amir Shah. “An artificial limb would help make her more independent but we can’t afford one on our own,” he said, adding that his family was poor and had already spent thousands on her treatment.

Shabnam, meanwhile, says that she will not be satisfied until her husband has suffered as much as she has. “I believe in qisas,” she says, referring to the Islamic tradition of retaliation. “I want him to feel this pain too.”