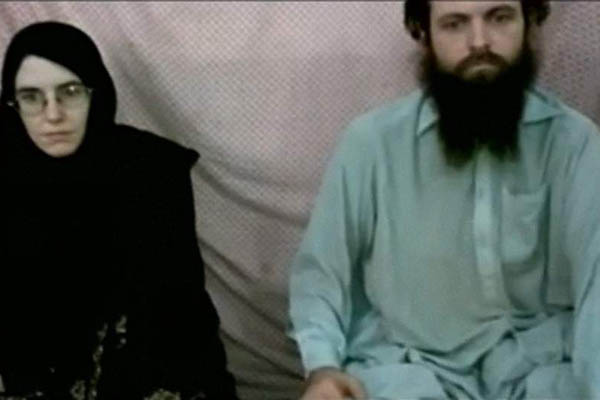 Canadian man and his American wife, captive since 2012, have asked their governments to urge Kabul to reconsider insurgent executions.

An American-Canadian couple held hostage by the Taliban for four years have urged their governments to pressure Kabul to change its policy on executions of captured insurgents, according to a new video which surfaced on Tuesday.

Canadian Joshua Boyle and his American wife Caitlan Coleman, who has given birth to two sons while in captivity, were kidnapped in Afghanistan in 2012 during a backpacking trip.

In the two minute, 31 second video, shared by SITE Intelligence group, the couple were shown saying their captors were “terrified” and “frightened” of the Afghan government executing their fellow fighters.

In early May, Kabul hanged six Taliban-linked inmates, in the first set of executions carried out as part of President Ashraf Ghani’s new hardline policy against the insurgents who are stepping up their nationwide offensive. It was not clear when the video was shot, but it comes amid swirling rumors in Kabul that the government plans to execute Anas Haqqani, son of the Taliban-allied Haqqani network’s founder, who has been held since 2014.

The government has declined to comment on those rumors.

In Washington, State Department spokesman John Kirby said U.S. officials were aware of the video and were examining it “for its validity.”

“We remain concerned obviously about the welfare of Caitlan and her family and we continue to urge… their immediate release on humanitarian grounds,” Kirby told reporters. He added that Washington had spoken to the governments of both Afghanistan and Pakistan to insist on the need to ensure that captured U.S. citizens are returned home safely.

Earlier this year, Caitlan’s parents James and Lyn Coleman, who live in Pennsylvania, appealed to the Taliban to release the couple and their two young children. The Colemans last saw their daughter in July 2012, when she set off for Russia on a hiking trip with Boyle that took them through Central Asia and ultimately into war-torn Afghanistan.

The couple told Circa News that they got a letter from Caitlan last November proving that she and Boyle were still alive, and announcing that she had given birth to a second son.

The couple was last seen in a video emailed to her parents in 2013 in which they asked the U.S. government and their families to secure their release. The Colemans made the video public after Bowe Bergdahl, a U.S. Army sergeant held captive for five years in Afghanistan, was freed in a prisoner swap.