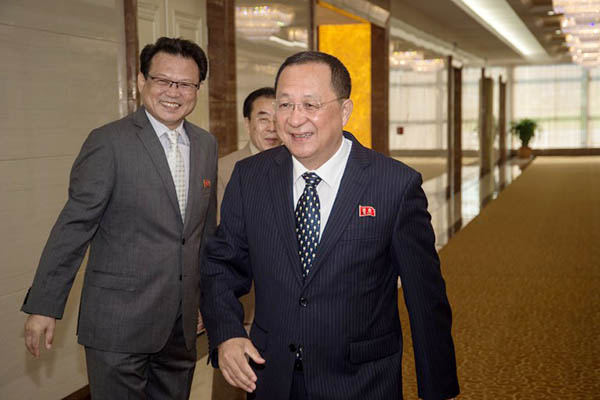 North Korea’s foreign minister has brushed aside U.S. President Donald Trump’s fiery threat to destroy his nation, comparing it to a “dog’s bark” and suggesting Pyongyang would not be deterred by the rhetoric.

Trump used his stormy maiden address at the United Nations General Assembly on Tuesday to warn the North that Washington would “totally destroy” it if the U.S. or its allies was attacked. The bellicose speech came after months of escalating tensions over advances in the rogue weapons program operated by Pyongyang, which has defied tough sanctions to launch its sixth and largest nuclear test and to fire a series of missiles over Japan.

Arriving in New York for the U.N. meetings, North Korean Foreign Minister Ri Yong-ho was mobbed with questions from reporters about the Trump speech and replied with a proverb. “There is a saying that marching goes on even when dogs bark,” he said as he entered his hotel on Wednesday. “If they are trying to shock us with the sound of a dog’s bark they are clearly having a dog dream.”

Isolated and impoverished, the North says it needs a sturdy nuclear deterrence to protect it from an aggressive U.S. and the autocratic regime has made militarism a central part of its national ideology.

Pyongyang’s stated aim is to be able to target the U.S. mainland and the nation has flaunted the advances in its weapons program in recent weeks, with the September test of what it said was a miniaturized H-bomb capable of being loaded onto a rocket. The country also tested two intercontinental ballistic missiles in July that appeared to bring much of the U.S. mainland into range.

The increasingly brazen provocations have frayed the patience of the U.S. and its allies. Trump dubbed the North’s leader Kim Jong-Un “Rocket man” and said he was on a “suicide mission.”

A day later Japan’s Prime Minister Shinzo Abe told the U.N. that dialogue with the North would not work. The comments are likely to dismay China—the North’s only major ally and trading partner—which has consistently called for a resumption of talks.

Observers say that despite the tough rhetoric, any military response to the crisis would risk a devastating conflict that would imperil millions.

The North has fortified its southern frontier with a hefty arsenal of artillery that has the South’s capital Seoul, just 55 kilometers away, in its sights. Japan is also within range of missile strikes, while the North itself has a population of millions ensnared by the Pyongyang regime.