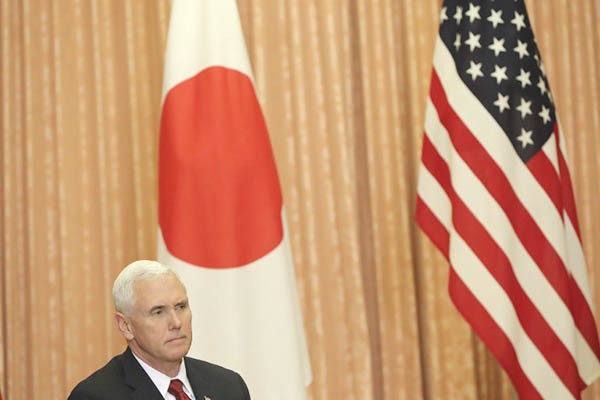 Pyongyang’s deputy foreign minister has threatened ‘all-out war’ if U.S. takes any action against it

North Korea has threatened to launch missile tests “every week,” keeping up its drumbeat as Vice President Mike Pence arrived in Japan with a renewed security commitment designed to soothe nerves over Pyongyang’s atomic weapons program.

The North, which is intent on developing a nuclear-tipped ballistic missile capable of reaching the mainland U.S., defied international pressure on Sunday with a test that failed immediately after launch. As fears grow that it may also be preparing for its sixth nuclear weapons test, Vice Foreign Minister Han Song-Ryol said that its program would only escalate.

“We’ll be conducting more missile tests on a weekly, monthly and yearly basis,” Han told the BBC in an interview, threatening “all-out war” if the U.S. took any action against it.

In South Korea on the first leg of an Asian tour, Pence visited the heavily fortified Demilitarized Zone separating the two Koreas on Monday and warned Pyongyang against further provocations, saying “all options are on the table.”

North Korea could react to a potential U.S. strike by targeting South Korea or Japan, and officials in both countries have been ill at ease with the more bellicose language deployed by President Donald Trump’s administration. Pence pointed to Trump’s recent strikes on a Syrian airbase and an Islamic State complex in Afghanistan as a warning to Pyongyang not to underestimate the administration’s resolve.

Throughout his bareknuckle election campaign, Trump repeatedly called into question a mutual defense treaty between Japan and the United States, suggesting Tokyo should pay for its own security. But now, Pence will try to reassure his jittery hosts that those decades-old security commitments are ironclad, a necessity made more acute after Washington’s refusal to rule out military action against the regime.

Tensions between Pyongyang and Washington have soared in recent weeks as a series of North Korean missile tests have prompted ever-more severe warnings from Trump’s administration.

Asked by a reporter what message he had for North Korea’s young leader Kim Jong-Un on Monday, Trump replied “Gotta behave.”

North Korea’s deputy ambassador to the United Nations reiterated on the weekend that the North is ready to respond to any U.S. missile or nuclear strike. “If the United States dares opt for a military action… the DPRK is ready to react to any mode of war desired by the Americans,” Kim told a news conference, using the abbreviation of the country’s official name. “We will take the toughest counteraction against the provocateurs.”

Like South Korea, Japan already faces a direct threat from the secretive regime. In early March, the North simultaneously fired four ballistic missiles off its east coast, three of which fell provocatively close to Japan, in what it said was a drill for an attack on U.S. bases in the country.

The Pentagon has not discussed which missile blew up after its launch on Sunday from a base near Sinpo on the North’s east coast, and the White House has said only that it was a medium-range device. But John Schilling from the 38 North monitoring group said the failure was indicative of the test of a new and hitherto unknown system being developed by Kim Jong-Un’s regime.

“That’s a common failure mode for North Korean missiles very early on in their development cycle when they are working out the bugs in the propulsion and guidance system,” the weapons expert told AFP. “More detail would always be nice. But I am going to suspect that this was a new missile or certainly one that has not been well-developed.”

Pence’s Japanese hosts will be cautious about any U.S. military action that could trigger a broader regional conflict. Their hope is that the White House will focus on pressuring China, Pyongyang’s only major ally, to redouble its efforts to rein in the regime and bring it back to the negotiating table after abandoning six-nation talks in 2009.

“In order to strengthen the way we deal with the North Korean issue, we will convey our view and conduct policy consultation to make sure that we are on the same page,” Japanese chief government spokesman Yoshihide Suga said Tuesday.