Home Lightbox North Waziristan: Before and After the Taliban

North Waziristan: Before and After the Taliban 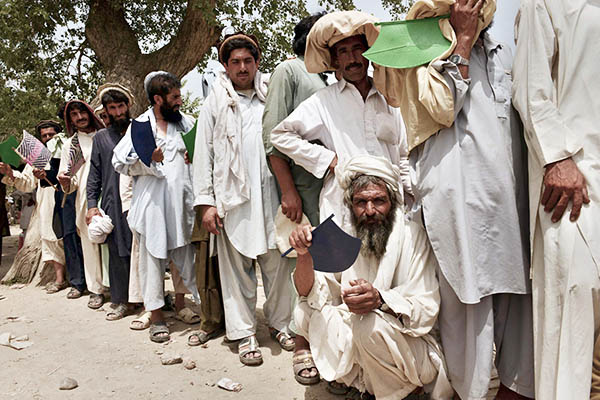 Internally displaced tribesmen queue up for food in Bannu. A. Majeed—AFP

Tribesmen who have sought refuge in Bannu claim the militants were initially welcomed, but soon became figures of dread.

It took Ambroz Khan two days of standing in a torturously slow-moving queue before he could register as an internally displaced person at Bannu. The 28-year-old, who works as a driver, had to abandon his home and most of his belongings when he and his family fled North Waziristan after Pakistan’s military launched Operation Zarb-e-Azb on June 15. But while he appreciates the need to exterminate terrorism from Pakistan, he says the Taliban helped introduce a better way of life to the residents of the tribal areas. He isn’t the only one.

One of over 900,000 tribesmen who have sought refuge in Bannu, Khan says he had fled to Afghanistan when the government announced Zarb-e-Azb. “I had to return because some members of my family had stayed behind in Waziristan,” he says, referring to the 29 family members he is currently sharing a small house with, including his brother’s entire family. “There isn’t much difference between the [refugee camp] in Afghanistan and the one in Bannu. But the weather was better,” he adds.

According to Khan, North Waziristan was transformed when the Taliban started to exert control in 2004. He claimed that the Taliban had “won the hearts and minds” of locals after killing members of Afghan Hakeem Khan’s gang, who were charging protection money from shopkeepers and transporters and were involved in several other criminal activities. However, he said, shortly after evicting Hakeem Khan, the Taliban started to engage in similar activities.

Mirwaiz Khan Wazir, a 60-year-old who is also seeking refuge in Bannu, agreed with Khan. “The Taliban completely changed our lives,” he said. “They eliminated the role of elders in our society and hampered the effectiveness of the political administration,” he said.

The father of 14 said he blamed the Taliban for destroying the peace of North Waziristan. “The Army and the U.S. drones followed the Taliban, destroying our peaceful region,” said Wazir, adding, “ [Before the Taliban] I had only seen chickens and cattle being slaughtered. They showed us the bodies of slaughtered humans.” He said that after the brutal massacres perpetrated by the Taliban, no one dared to interfere in their business.

However, Khan said that while the Taliban progressively became more oppressive, at one point they were considered vital to the local economy. “The Taliban paid well [so we embraced them],” he said. “They would often hire the services of the local community.” According to Khan, the Taliban seldom haggled and were “good customers.” He also appreciated the technological advances they introduced to North Waziristan. “They brought in electronic gadgets to the region, like laptops, and mobile and satellite phones,” he said. “Before they introduced us to mobile phones, we were completely reliant on landlines, which would often get damaged and be out of service for weeks at a time,” he said. “They would also frequently visit Afghanistan and return with exotic food that was alien to the local community,” he added.

Lajbar Khan, a 38-year-old who used to sell fruits and vegetables in Mir Ali, said the Taliban had revitalized his business. “Thanks to them, I could afford to bring in fruit from across the country, which they paid very well for,” he said. He said people in North Waziristan barely cared about fruit before the Taliban started demanding more variety. “They were good customers. My business expanded [thanks to their money], and I also started selling goats to them,” he said. “They were fond of eating mutton and were not interested in cows and buffaloes. I earned a lot of money from them,” he added, saying the Taliban would often order from him in bulk.

But while the local community appreciated the advances introduced by the Taliban, they were accompanied by greater fear over their sophisticated weaponry, said Khan. “A decade ago, we did not fear anyone [because we had our own weapons],” said Khan, “But the Taliban [and their affiliates] introduced weapons that scared us.” According to Khan, the Khorasan faction of the Taliban was the most feared. “People would hide as soon as they saw their vehicles with tinted windows,” he said. “I was always terrified of dealing with them, but had no other choice since they were responsible for my livelihood.”

Lajbar Khan agrees, saying the Taliban virtually ruled the entire tribal region and you had no choice but to obey them. “They were wrong,” he says. “Because of them, our lives eventually became hell. We had to worry about [U.S.] drone strikes, unannounced curfews, and checkpoints.”

According to both Lajbar and Khan, the biggest change was the cultural shift that the Taliban enforced. “Our wedding ceremonies used to be full of music, fun and dance, but the Taliban banned all this,” said Lajbar. “They said it was against Islam and sharia and forced us to adopt piety.” Khan admits that even drivers had to be careful about what kind of music they played. “We would play the latest Pashto music when driving to Bannu,” he said. “But when we would return home, we would only play jihadi anthems and religious hymns.”

The sad thing about this report is that as early as 2004 or even before that TALIBAN were in Pakistan. To say that ARMY and Governmant did not know is a mistake. Terrorists have been laying their roots in Pakistan for decades because they were allowed. I a grateful for Zarb e Azb but frankly, Pak Army is just cleaning its own mess. Better late than never!
However, without a matching operation in Karachi i fear its only a matter of time before terrorists regain their strength and strike again. God know they have enough sympathizers in Army and Government.