Home Editorial Note from the Editor

Note from the Editor 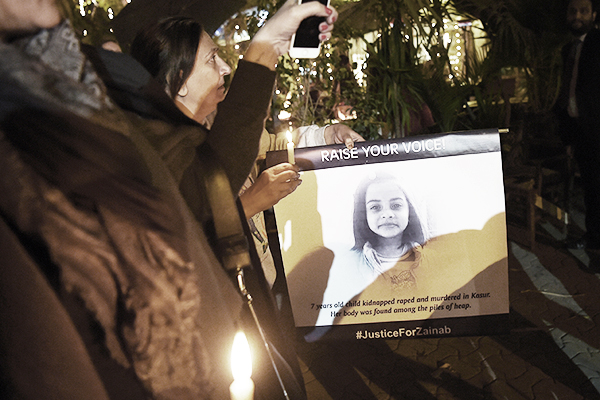 The heart-rending case of 7-year-old Zainab Ansari made headlines around the world. Less than six weeks after her discarded body was discovered on a trash heap in Kasur, Mohammed Imran Ali, 24, was convicted, on Feb. 17, by an antiterrorism court for her rape and murder. The trial lasted a mere five days since DNA and polygraph tests supported his confession. Ali also confessed to killing seven other children.

For these horrific and repugnant crimes, the court handed him four death sentences in all. But the conviction of this serial sexual predator for the crimes he committed against children should not be the end of the matter. Sadly, what Zainab went through is not a one-off; stories like hers are all around us. So we owe it to her, and to all those who have suffered abuse, to ensure predators are thwarted and punished. Our young boys and girls must be allowed to have their childhoods and they must be allowed to live their lives free from any form of abuse.

In order to get a greater understanding of how widespread the problem actually is and how hard the fight will be, we need only look at a report produced by Sahil, an Islamabad-based welfare agency devoted to the protection of children. Its “Cruel Numbers” report for 2016 is based on reported cases only, yet the statistics are staggering. On average, 11 children were sexually abused in Pakistan every single day. That year, 502 children were raped, 453 were sodomized, 271 were gang-raped, and 268 were gang-sodomized. Just take a second to digest those numbers, each one of them a son, a daughter, a life marked. There were 2,810 such “cases” in 2016, says Sahil, and the vast majority (1,765) involved acquaintances as opposed to strangers (798). Children between the ages of 11 and 15 were most susceptible to harm with those younger also exposed to significant risk. “The data shows sexual abuse can occur anywhere, at any time, therefore children are not safe,” says the report. Like Zainab, that year, “A total of 100 victims were murdered after sexual assaults” by perpetrators doing what they felt necessary to hide their crimes.

It is difficult to wrap one’s head around such cruel numbers and to overcome one’s own sense of denial and helplessness. But it is imperative that we must. Zainab’s story has been highly emotive and harrowing for all of us and it has affected each and every one of us in different ways. My own roiled and unprocessed emotions manifested themselves in a series of posts I wrote on a personal social-media account exactly two weeks to the day after Zainab’s body was found. Plainly read, these now-deleted posts were callous and insensitive, caused public misapprehension, and served only and ironically to distract from the painful discussion I firmly believe we need to be having, on a consistent basis, on an evil far more widespread than we can bear to admit. These posts came from a place of personal haunting, rage, and hurt. There is nothing in my professional or personal record to suggest they were in any way even remotely reflective of how I feel, who I am, what I believe in or stand for. I deeply regret the pain and anger that they caused.

As editor of Newsweek Pakistan, which we launched in 2010, I have had the privilege of working with some of the brightest and most compassionate people who have covered stories like Zainab’s with great empathy and sensitivity. I am also sorry that these posts called into question their hard work and the established record of our newsmagazine, and of Newsweek as a whole. Going forward, Newsweek Pakistan will continue covering difficult stories like Zainab’s in the hope that we can, collectively, help shine a light on the evil that has robbed so much from so many of our children for too long. It is an evil many of us are painfully familiar with. We are working on special content on the subject of child sexual abuse to serve as a resource for survivors and their families. We hope that this will make some difference.

Not Their Finest Hour