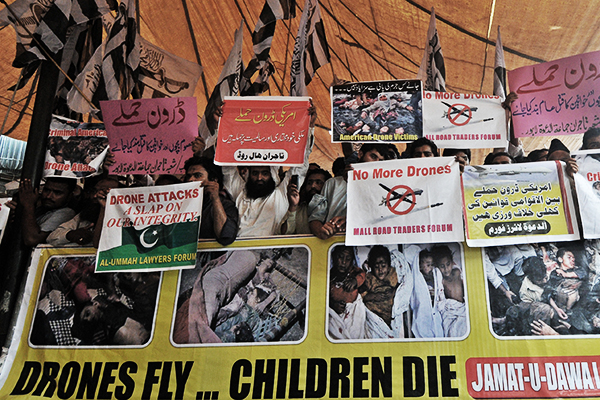 The National Security Agency is deeply involved in U.S. drone strikes against Al Qaeda militants and uses electronic-surveillance tools to track down terror suspects, The Washington Post reported on Wednesday.

The report was based on documents provided by Edward Snowden, the U.S. intelligence contractor turned leaker who has exposed the massive scale of the NSA’s eavesdropping efforts.

NSA cyber spying helped pinpoint a senior Al Qaeda figure, Hassan Ghul, who was killed in a drone strike in Pakistan’s tribal belt in 2012, the Post wrote. The operation was made possible in part by an email from Ghul’s wife that was scooped up by the NSA’s dragnet, it said.

The United States has never publicly confirmed that it took out Ghul. But documents passed to the Post by Snowden made clear he was killed by the U.S. government last year. Ghul was captured in 2004 and, under questioning, helped reveal Osama bin Laden’s courier network—information that eventually led to the U.S. commando raid that killed the Al Qaeda mastermind.

Ghul spent two years at a secret CIA prison and in 2006, the United States transferred him back to his native Pakistan, where he was released and returned to Al Qaeda. To help the CIA locate Ghul and other terror suspects, the NSA placed “a surveillance blanket over dozens of square miles of northwest Pakistan” to uncover communications and the whereabouts of Al Qaeda militants, the newspaper said.

The email from Ghul’s wife “about her current living conditions” included enough details to confirm the coordinates of their home, according to a document leaked by Snowden. “This information enabled a capture/kill operation against an individual believed to be Hassan Ghul on Oct. 1,” said the document quoted by the Post.

The newspaper said it was withholding numerous details about the “targeted killing” missions at the request of intelligence officials who were concerned about possible damage to operations and national security. As with previous leaks from Snowden, the NSA did not deny the report but issued a statement saying its spying was focused on suspected terrorists and other threats to the U.S. “We’re focused on discovering and developing intelligence about valid foreign intelligence targets, such as terrorists, human traffickers, and drug smugglers,” said NSA spokesperson Vanee Vines. “Our activities are directed against valid foreign intelligence targets in response to requirements from U.S. leaders in order to protect the nation and its interests from threats such as terrorism and the proliferation of weapons of mass destruction.”

The drone bombing campaign, President Barack Obama’s primary tactic against Al Qaeda, has been portrayed as a purely CIA undertaking. But the Post report showed the country’s eavesdropping agency has played a crucial role in providing “signals intelligence” to the CIA for the controversial drone strikes.

The NSA also created a clandestine unit known as the Counter-Terrorism Mission Aligned Cell, or CT MAC, to focus spying resources on elusive terror suspects. Snowden is wanted by U.S. authorities on espionage charges but he has secured asylum in Russia.