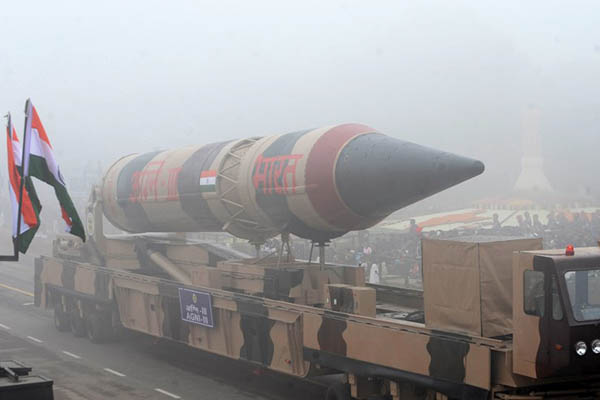 New report says while the number of warheads overall has reduced, nuclear states are continue to develop new weapons systems.

Between 2010 and 2015 the number of warheads fell from 22,600 to 15,850 according to the institute’s annual disarmament report which said the U.S. and Russia represented the bulk of the reduction. The institute also pointed to “extensive and expensive long-term modernization programs” in the world’s two largest nuclear powers, which account for 90 percent of the weapons.

“Despite renewed international interest in prioritizing nuclear disarmament, the modernization programs under way in the nuclear weapon-possessing states suggests that none of them will give up their nuclear arsenals in the foreseeable future,” SIPRI researcher Shannon Kile said in a statement.

The other three nuclear armed states legally recognized by the 1968 Nuclear Non-Proliferation Treaty—China (260 warheads), France (300 warheads), Britain (215 warheads)—are “either developing or deploying new nuclear weapon systems or have announced their intention to do so” according to the Stockholm-based peace institute. China was the only state among the five global nuclear powers to have a “modest” increase in the size of its arsenal.

While the remaining nuclear states—India (90 to 100 warheads), Pakistan (100 to 120 warheads) and Israel (80 warheads)—have considerably smaller stockpiles, both New Delhi and Islamabad continue to increase their arsenals while Jerusalem has tested long-range ballistic missiles.

North Korea is believed to be developing its arsenal of six to eight warheads but SIPRI said “technical progress” was difficult to assess.

Reliable information on nuclear stockpiles varied greatly between states with the U.S. getting top marks for transparency in the report, while Britain and France were more restrictive and Russia divulged nothing officially, except in bilateral contacts with the U.S.

In Asia, China revealed little about its arsenal and the only information made public by nuclear rivals India and Pakistan was announcements of missile tests.

The five nuclear powers and members of the U.N. Security Council—U.S., Russia, China, Britain and France—along with Germany, are in ongoing talks with Iran to persuade the Islamic Republic not to develop nuclear weapons in exchange for the lifting of international sanctions.