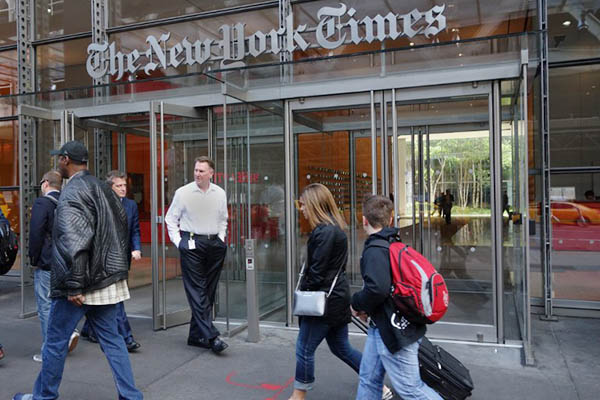 Despite claims from president-elect that newspaper is lost subscribers over its reportage, it says there has been a net increase of 41,000 paid readers.

The New York Times reported a spike in subscriptions since the Nov. 8 election, despite being called “fools” by president-elect Donald Trump for its coverage.

The newspaper said in a statement on Thursday it saw a net increase of 41,000 paid subscriptions in the week after the vote, including print and digital, “the largest one-week subscription increase since the first week of the digital pay model in 2011.”

Trump, who has been warring with much of the mainstream news media since the start of his presidential campaign, has been especially critical of his hometown daily since the election. On Sunday, Trump tweeted that “the @nytimes is losing thousands of subscribers because of their very poor and highly inaccurate coverage of the ‘Trump phenomena’.”

Trump also took issue with Times reports of disarray in his transition team, saying in another tweet that the newspaper “is just upset that they looked like fools in their coverage of me.”

The newspaper said it saw “record numbers for coverage of the 2016 election results, setting new traffic records on November 8, 9 and 10th” adding that readers spent five times longer than usual, amounting to some 12.8 million hours.

“Our newsroom did exceptional work throughout the campaign and they have continued to provide our readers with penetrating and comprehensive coverage of the incoming administration,” said Mark Thompson, president and chief executive of the New York Times Co. “The result has been record-breaking audiences and tens of thousands of new subscribers—clear evidence of how much public demand there is for high quality, deeply reported, independent journalism. We will continue to deliver that journalism, without fear or favor, to our readers in America and around the world.”