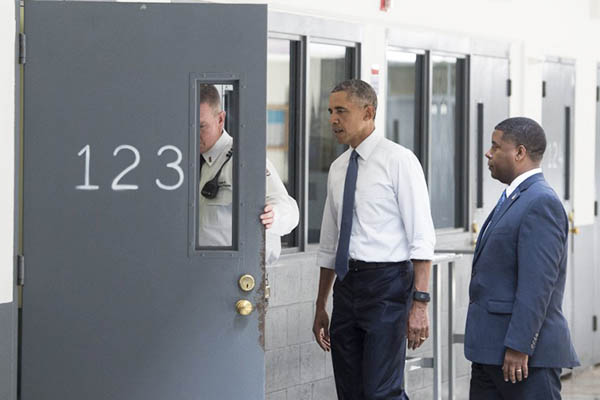 Barack Obama became the first sitting U.S. president to visit a federal prison on Thursday, amid a push to reform America’s overcrowded and expensive correctional system.

Obama toured the ‘B’ block of El Reno Federal Correctional Institution in Oklahoma, where he met six inmates convicted of drug offenses. Nearly a quarter of the world’s prison population is concentrated in American jails. However, the United States accounts for less than five percent of the world’s population. Obama wants to cut the number of people incarcerated, curb use of solitary confinement and end mandatory minimum sentences.

After viewing a small cell that can hold up to three inmates, Obama said: “This is an outstanding institution within the system, and yet they’ve got enormous overcrowding issues.”

The United States jails as many people as the top 35 European nations combined. Black and Latino Americans represent 60 percent of the prison population while around 30 percent of prisoners are white. Around 71,000 minors are also incarcerated in the United States.

“I think we have a tendency sometimes to almost take for granted, or think it’s normal, that so many young people end up in our criminal justice system,” Obama said. “It’s not normal. It’s not what happens in other countries.”

“What is normal is teenagers doing stupid things,” Obama said.

Recounting his discussion with inmates, he added: “When they describe their youth, these are young people who made mistakes that aren’t that different from the mistakes I made, and the mistakes that a lot of you guys made. The difference is that they did not have the kind of support structures, the second chances, the resources that would allow them to survive those mistakes. There but for the grace of God.”

Obama has said he will try to pass “meaningful criminal justice reform” this year. “This is a cause that’s bringing people in both houses of Congress together. It’s created some unlikely bedfellows,” Obama said earlier this week.

He has tried to show Republicans angry at federal spending that prison costs are also hurting the budget. At $80 billion, the budget for prisons represents a third of the Department of Justice’s annual spending. But all that money doesn’t mean prisons are in good condition.

A report by the Columbia Journalism Review on Illinois state prisons revealed vermin, flooded basements, a general lack of sanitation and crowding, with “some serving time for nothing more than driving on a revoked license.”

SC Halts Moves to Release Prisoners Due to...