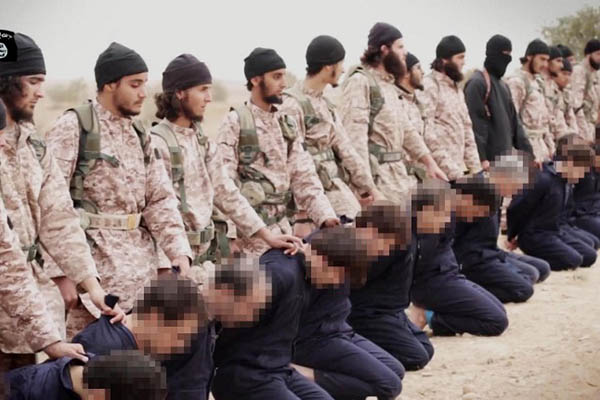 The video also showed the gruesome simultaneous beheadings of at least 18 men described as Syrian military personnel, the latest in a series of mass executions and other atrocities carried out by I.S. in Syria and Iraq. It was made public in a warning to Washington as it prepares to send more troops to Iraq.

Kassig’s “heartbroken” parents said they were “incredibly proud” of his humanitarian work to help Syrians trapped in a bloody civil war. The 26-year-old “lost his life as a result of his love for the Syrian people and his desire to ease their suffering,” Ed and Paula Kassig said in a statement posted on Twitter.

Kassig, who took the name Abdul-Rahman after converting to Islam, was captured last year and was threatened in an Oct. 3 video showing the beheading of British aid worker Alan Henning. “Abdul-Rahman was taken from us in an act of pure evil by a terrorist group that the world rightly associates with inhumanity,” Obama said in a statement released as he flew back to Washington from a trip in Asia.

Republican Senator Dan Coats of Kassig’s home state of Indiana stressed that “we must not let this momentary triumph of evil ultimately prevail.”

In the undated video, a man who appears to be the same British-accented jihadist who beheaded previous Western hostages stands above a severed head. “Here we are burying the first American crusader in Dabiq, eagerly waiting for the remainder of your armies to arrive,” the black-clad masked executioner says, referring to a northern Syrian town. He also urges Obama to send more troops back to the region to confront I.S., just as Washington prepares to double its military personnel in Iraq to up to 3,100 as part of the international campaign it heads against I.S.

Kassig, an Iraq war veteran, had risked his life to provide medical treatment and relief supplies to those suffering from Syria’s civil war. He founded a group through which he trained some 150 civilians to provide medical aid to people in Syria. His group also gave food, cooking supplies, clothing and medicine to the needy.

During a trip to refugee camps outside the Lebanese capital Beirut in March 2012, he said he found a “shortage of everything except suffering.”

“Here, in this land, I have found my calling,” Kassig wrote in an email to friends, family and teachers at the time. “I do not know much, every day that I am here I have more questions and less answers, but what I do know is that I have a chance to do something here, to take a stand. To make a difference.”

U.S. Secretary of State John Kerry said that American government officials had worked alongside Kassig’s family to try to secure his release. “During his time in captivity, his family, and the entire government, including his home state Senator Joe Donnelly, worked to avoid this tragic outcome,” the top U.S. diplomat said.

Kassig was the fifth Western hostage killed by I.S. in recent months, after the two U.S. reporters and two British aid workers were beheaded. Sunday’s video was substantially different from previous I.S. recordings. Kassig was not shown alive in the footage, and no direct threats were made against other Western hostages.

British Prime Minister David Cameron said he was “horrified” by the “cold-blooded murder,” which French President Francois Hollande called a “crime against humanity.”

Burhan Mousa Agha, a Syrian friend who worked with Kassig in Lebanon, described him as a funny, dedicated and brave man who only wanted to help. “I want to apologize to his family. I’m sorry that their son died in my country, trying to help,” Agha told AFP. “They are animals, less than animals, they don’t represent Islam. Peter wasn’t fighting anyone, he was teaching people how to save lives. I want to send a message to everyone that Peter was a hero, a real hero,” Agha added.

The Sunni Muslim extremist group has seized large parts of Iraq and Syria, declared a “caliphate” and imposed its brutal interpretation of Islamic law. The latest video also showed a highly choreographed sequence of the beheadings of at least 18 prisoners said to be Syrian officers and pilots loyal to President Bashar al-Assad.

Jihadists are shown marching the prisoners past a box of long military knives, each taking one as he passed, then forcing them to kneel in a line and decapitating them. “Today, we’re slaughtering the soldiers of Bashar,” the same black-clad militant said in the video. “Tomorrow, we’ll be slaughtering your [U.S.] soldiers.”