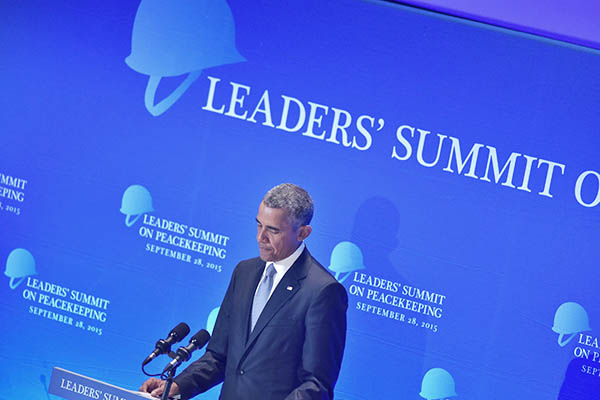 U.S. president says peacekeepers remain one of the most important tools to address armed conflict.

Over 50 countries pledged 40,000 troops for United Nations peacekeeping on Monday at a U.S.-led summit called to shore up missions under strain from the rise in global crises.

China scaled up its contribution, taking the lead in setting up an 8,000-strong standby police force while Colombia made a first-time offer of as many as 5,000 troops. The pledges represent a major boost to U.N. peacekeeping, which relies on voluntary contributions from U.N. member states to run its 16 missions worldwide.

“We know that peace operations are not the solution to every problem,” Obama told the summit held on the sidelines of the U.N. General Assembly. “But they do remain one of the world’s most important tools to address armed conflict,” he said.

Obama opened the summit by announcing a tally of 30,000 new troops for peace missions, but after leaders took turns at the podium to announce contributions, the total reached 40,000.

A key player in peacekeeping in Africa, Rwanda offered two attack helicopters, two field hospitals, an all-female police unit and 1,600 new troops. Indonesia boosted its participation with training and 2,700 new troops while India pledged 850 additional soldiers. British Prime Minister David Cameron announced 70 troops for the U.N.-African Union mission in Somalia and up to 300 troops for South Sudan, where the U.N. mission is grappling with one of the world’s worst humanitarian crises.

Pledges rolled in from smaller nations such as Armenia and Fiji and bigger players like Brazil, Turkey, Germany and Australia.

The United States had hoped to draw more pledges from European countries that have gradually pulled their troops out of peacekeeping and contributed to the NATO-led mission in Afghanistan. In the end, the European pledges remained modest, but officials stressed the importance of highly trained troops from Britain, the Netherlands, Spain and Italy to peacekeeping.

In contrast, China—which has strong economic interests in Africa—offered more engineering soldiers, transport and medical staff and pledged to train 2,000 peacekeepers from other countries to carry out de-mining operations.

In his address, Obama stressed that strengthening peacekeeping would serve “our common security” and pledged to double the number of U.S. officer staff serving under the blue flag.

There are just 78 Americans serving in U.N. peace missions but Washington remains by far the largest financial backer, providing 28 percent of the U.N. peacekeeping budget of $8.3 billion.

Boosting troop contributions will help the United Nations tackle a wave of sexual abuse allegations that have hit its missions, notably in the Central African Republic. The new commitments will give Secretary General Ban Ki-moon the leeway to remove units whose soldiers face accusations and replace them without weakening a mission.

French President Francois Hollande, who pledged to step up training of African forces, referred to the sexual abuse scandal in his address to the summit, saying countries “must not allow the U.N. flag to be tarnished.”

France is investigating allegations that 14 soldiers from its Sangaris military force sexually abused children in the Central African Republic in return for food, from December 2013 until June 2014. While the French troops were not serving in a U.N. peacekeeping mission, the Sangaris operation was authorized by a U.N. Security Council resolution.