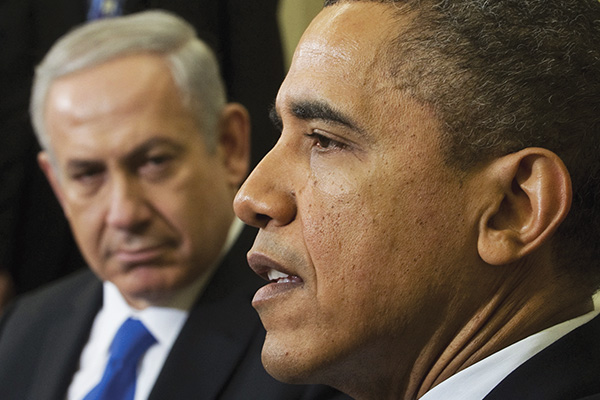 As the Israeli premier works to build a new coalition government at home, he faces one of the worst confrontations in his stormy relationship with the White House. He has tried to play down declarations he made during his recent victorious election campaign in which he ruled out the creation of a Palestinian state and stigmatized Arab voters. But Obama has not let him off the hook and, after White House leaks accused Israel of spying on U.S.-Iran nuclear talks, he insisted the allies have more tough talking ahead.

“The issue is a very clear, substantive challenge,” Obama told reporters at a joint White House news conference with Afghanistan’s President Ashraf Ghani. “We believe that two states is the best path forward for Israel’s security, for Palestinian aspirations and for regional stability. That’s our view and that continues to be our view. And Prime Minister Netanyahu has a different approach.”

Obama denied it was a matter of personal animosity between himself and Netanyahu, describing their notoriously cold relations as “business like.” But he said the United States still backs the creation of a Palestinian state alongside Israel, and that he would take the issue up with Netanyahu’s government once it is formed.

“This is a matter of figuring out how we get through a knotty policy difference that has great consequences for both countries and the region,” he said. Since Netanyahu’s party won Israel’s March 17 election, not a day has passed without a U.S. comment—official or otherwise—on the implications of his hardline rhetoric.

During campaigning he said he would block a Palestinian state and on polling day raised the specter of an Israeli Arab rush to the polls to drum up right-wing votes. Although Netanyahu has since tried to backtrack—denying he reneged on the idea of a two-state solution and apologizing for giving offense—the damage has been done. In addition to Obama’s stern reminder, U.S. officials have been feeding criticism of Israel’s tactics to the American media.

In the latest headline, The Wall Street Journal reported U.S. officials accusing Israel of spying on nuclear negotiations with Iran with the aim of thwarting an Obama foreign policy priority. “It is one thing for the U.S. and Israel to spy on each other. It is another thing for Israel to steal U.S. secrets and play them back to U.S. legislators to undermine U.S. diplomacy,” a senior official told the paper.

Current and former U.S. officials quoted in the report said they believed Israel had passed on the information to U.S. lawmakers in a bid to undermine support for the emerging deal. In a sign of jitters in Israel—used to unquestioned close ties to its senior ally—Israeli officials rushed to deny the report, which caused little fuss in Washington, where Israeli espionage is accepted as a given.

Israel’s Foreign Minister Avigdor Lieberman flatly denounced the report as “incorrect and inaccurate.” And Intelligence Minister Yuval Steinitz said: “We categorically deny these allegations. Israel does not spy on the United States, period.”

“I don’t think we’ve ever had as bad a relationship between a president and a prime minister, and of course that has policy consequences—will the U.S. always use its veto for Israel?” he told AFP.

Last week, the White House said it might withdraw crucial diplomatic cover for Israel at the U.N. Security Council as part of a policy re-evaluation. The United States has traditionally used its veto to block U.N. resolutions seen as unfairly anti-Israeli, such as those condemning its security tactics on occupied Palestinian land. A withdrawal of U.S. cover could prove tricky for Israel, especially if the Palestinians resubmit once again a resolution setting an end date for the Israeli occupation.

Netanyahu angered the Obama administration this month, breaking diplomatic protocol to address the U.S. Congress in a bid to scupper the White House-backed nuclear deal with Iran. Then his electioneering comments only added fuel to the fire, putting Netanyahu firmly in the way of a decades-old U.S. policy by placing Israel in open opposition to a two-state deal.

During the vote, Netanyahu attempted to mobilize support by saying: “The rule of the right wing is in danger: Arab voters are going to the polls in droves.” This was widely seen as a racially divisive tactic and was roundly condemned by U.S. officials, forcing Netanyahu into a partial climb-down—he apologized for any offense caused. Some in Israel, however, see the accusations and criticism coming from Washington as sour grapes from a U.S. administration who would like to have seen Netanyahu’s coalition fall.