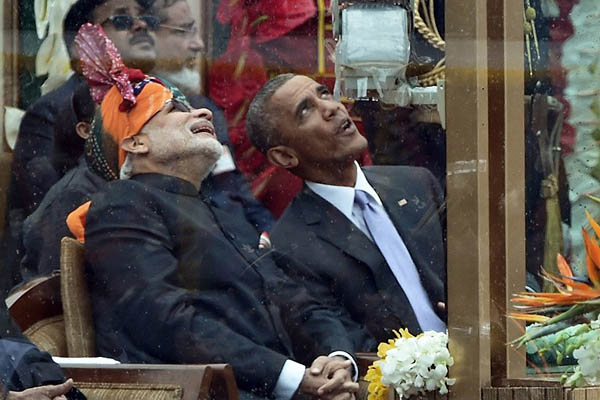 U.S. president is first American leader to be invited to the Indian event.

Rain failed to dampen spirits at India’s Republic Day parade on Monday as Barack Obama became the first U.S. president to attend the spectacular military and cultural display in a sign of the nations’ growing closeness.

Thousands of cheering spectators braved wet weather and heavy security to watch the parade, which marks the birth of modern India and includes everything from tanks and state-of-the-art weaponry to camels and traditional dancers. The invitation to the annual celebration is one of the biggest honors the country can bestow on a foreign leader and underscores the increasing warmth between Obama and India’s Prime Minister Narendra Modi.

The leaders smiled and chatted as they watched from behind a bulletproof glass screen, Modi sporting a green and orange hat with a pink circular plume that rivaled the spectacular military headgear on display. Obama gave a thumbs-up as stunt-riders on motorbikes formed their trademark human pyramid before the grand finale of the event, a fly-past by Indian fighter jets.

The display of military might came a day after Obama and Modi renewed a defense cooperation agreement, with the United States and India both seeking a counter-balance to a rising China. The mounted Border Security Force on their brightly decorated camels, a traditional highlight, drew loud cheers from spectators who were out in force.

“This day is all about patriotism and I’m lucky to be a part of it,” said 20-year-old college student Ajith Kumar, attending the central Delhi event with his parents and younger sister. “The fact that we have a guest like Obama has made it all the more special.”

Obama’s presence as chief guest represents a remarkable turnaround in his relationship with India’s new leader, who only a year ago was persona non grata in Washington. “I’m honored to be the first American president to attend this celebration, as well as the first president to visit India twice,” said Obama.

The parade celebrates the adoption in 1950 of the Indian Constitution—the day that India became a republic—more than two years after gaining independence from Britain.

A float representing Modi’s home state of Gujarat featured a statue of Sardar Patel, a founding father of the republic and personal hero of the premier, who is building the world’s tallest statue in his honor. Alongside the carnival floats and military hardware were reminders of India’s achievements, including a dance by schoolchildren representing the country’s Mars mission.

Roads were closed around the area, which has been declared a no-fly zone, and snipers were positioned on rooftops along the route, where 15,000 new CCTV cameras have been installed. No cameras were allowed near the spectacle, with even the White House press pack forced to hand over their phones.

The growing camaraderie between Modi and Obama comes after a tense row involving the arrest and strip-search of an Indian diplomat in New York marred relations in late 2013. The two leaders on Sunday announced a breakthrough on an agreement to provide civilian nuclear technology to India that was signed in 2008 but had been held up by U.S. concerns over liability in the event of a nuclear accident. They also extended a defense pact and agreed to enhance cooperation on climate change, but the focus was more on warming ties rather than specific policy announcements.

Modi has gone out of his way to welcome the U.S. president, breaking with protocol to meet him on the tarmac when he arrived on Sunday and inviting him to co-host a radio phone-in. The two leaders will on Monday make a joint address to company bosses in an event organized by the U.S.-India Business Council.

Modi is seeking to attract global business to manufacture in India to fulfill his election pledge of creating enough jobs for the burgeoning young population. U.S. Ambassador Richard Verma said before Obama’s arrival that trade was now running at around $100 billion a year—five times the level of a decade ago—and saw no reason it could not grow by another five times.